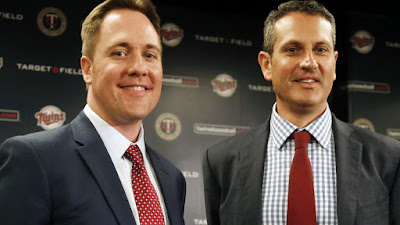 Recently, the Minnesota Twins made among the first big splashes in free agency this winter by signing catcher Jason Castro. He's not a bank-breaking starting pitcher, and he won't light the world on fire at the plate, but the acquisition sends all the right messages throughout Twins Territory.

First and foremost you must understand who Jason Castro is. Sure, a three-year, $24.5 million deal for a player with a .684 OPS might seem egregious in today's offensive era of baseball. Looking at the former Astros backstop through that lens would be shortsighted though. As it stands, Castro is an elite pitch framer, and has average caught stealing numbers, which makes him one of the best commodities in the game of baseball as it stands today.

In a previous piece about Castro, I said this in comparing him to the backstops Minnesota employed a season ago:

Not only is this move indicative of the Twins helping out their pitching staff, and addressing pitching concerns in a more economical way, but the optics surrounding the move are promising as well. Derek Falvey and Thad Levine are nearly combined what former Twins General Manager Terry Ryan was in age. They were supposed to embrace the new age of baseball, and welcome in an advanced way of thinking. Around the game, it was Castro behind the plate who embodied that, Minnesota who was often linked as making sense, and the duo comprising the new front office that got on board.

Far too often, Terry Ryan made his mark in free agency by throwing money at need positions. When Minnesota needed starting arms, he gave ill-advised millions to the likes of Kevin Correia and Ricky Nolasco. When he did make a solid move, Phil Hughes for example, he doubled down and processed an early extension to turn what was a positive into a negative. While it's just their first order of business, Falvey and Levine addressed a need in both catching and pitching, did so economically, and upgraded themselves from what Suzuki and Ceteno provided them a year prior.

In a vacuum, the Jason Castro deal makes a ton of sense for the Twins. He's a superior player to Kurt Suzuki even at his worst, and he checks off boxes across so many other facets of the organization as well. It's probably a bad bet to presume that Castro once again finds his former All Star self for Minnesota. Even if he doesn't though, a career .699 OPS with potential to enter back above the .700 plateau this season, combined with his defensive prowess, makes his presence a welcomed one.

I'd hope that the Twins aren't too terribly involved in free agency the rest of the way with so many similarly capable prospects that appear on the cusp of production in house. That being said, Falvey and Levine's first move should provide plenty of faith that the new men in charge have a firm grasp on what they are trying to accomplish, and a strong understanding of exactly how to get there.

Jason Castro is a great signing for the Twins. The thought process behind the execution of bringing him in is even better.
Posted by tlschwerz at 8:15 AM