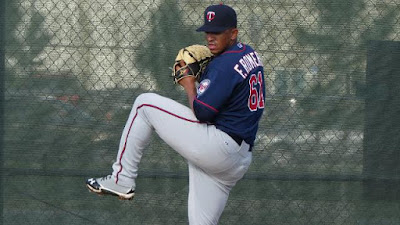 The Minnesota Twins have kicked off their 2016 offseason by introducing new Chief Baseball Officer Derek Falvey, and General Manager Thad Levine. Outside of the front office and coaching staff changes, the club hasn't done much with the roster thus far. Before the snow flies, that makes sense, but come Friday they'll need to make decisions on their 40 man roster inclusions.

With the deadline to protect minor leaguers from the Rule 5 Draft quickly approaching, the Twins will have to do some shuffling. As things stand at this moment, Minnesota has 36 spots claimed on their 40 man roster. They could clear up two more by removing Buddy Boshers and Juan Centeno. Another could be had if Trevor Plouffe is non-tendered. A final possibility, although not likely, would be moving on from Danny Santana even before he's out of options to start 2017. For the sake of this exercise, let's assume the Twins have six open 40 man spots by Friday.

There's well over 20 possible additions. Remember, anyone selected in the Rule 5 Draft must spend the duration of the upcoming season on the drafting team's major league roster, or risk being offered back to their initial organization (a la Zack Jones for the Twins this past season).

Now, let's get into the six I'm keeping:

Romero is a no-brainer. He was ranked the second best Twins prospect by Twins Daily's Seth Stohs, was Baseball America's 4th, and my 5th. After finally getting back to good health, he was great for both Cedar Rapids and Fort Myers this season. Romero has a chance to rise quickly, and could see time with the Twins in late 2017 if everything continues to go smoothly.

This one is another no-brainer. Garver earned his way on to the Twins by having a great minor leaguer season in 2016. He was probably worthy of the September call over John Ryan Murphy, and he could challenge for a 25 man spot to start the season this year. He's got better than average defensive skills, while being capable with the bat. Garver is a former 9th round pick that should make an impact in Minnesota.

Another player worthy of a September call up a season ago, Palka's downfall was not already being on the 40 man. Adam Brett Walker's skillset is very similar, but Palka's plate approach is just a bit better. The return from Arizona for Chris Herrmann, Palka's power is real, and as a bench bat or extra outfielder, the Twins could find themselves calling his name sooner rather than later.

I think the reason Minnesota protects Jorge is that they are pitching starved and he can provide a solution. I'm a believer that while Jorge isn't an exciting top-of-the-rotation option, he's very capable at filling one out. He's a strike thrower, and has handled his moves up the organizational ladder well. Sure, he hasn't pitched above Double-A, but given his ceiling, I think you'd find plenty of organizations ready to give him a big league shot.

When Minnesota finds themselves looking for that 25th man in 2017, it could very well come down to guys like Granite. Not only was he the organizations Minor League Hitter of the Year, but he also stole 50+ bases and played exceptional defense. His speed is real, and his threat on the basepaths is something the Twins should welcome. Rather than a veteran retread such as Shane Robinson or Robbie Grossman, it's a guy like Zack Granite that should be giving starters days off at Target Field.

Left unprotected a year ago, Jones was taken by the Milwaukee Brewers. He couldn't get healthy and rejoined the Twins organization. With a new regime in place, something that should absolutely work in his favor, Zack's velocity alone should have him in the big leagues. He's a hard thrower and can generate strikeouts out of the pen. Control has always been an issue, but it's hard not to get behind what the ceiling looks like. If Jones is added, I'd be far from surprised to see him beat either Jake Reed or Nick Burdi to the big leagues.

Update: Zack Jones had surgery in September to repair a torn labrum in his shoulder. He'll almost certainly be left off the 40 man and won't be selected in the Rule 5 Draft as he won't be able to return to action until July at the earliest.

Vielma gets the nod here over Stuart Turner simply because I don't know what the Twins plan to do at shortstop. Jorge Polanco needs to play at the big league level, but he's a second basemen. If Brian Dozier stays with the organization, he'll be miscast at short, and Polanco's defense is a problem. Velma has never been known for his bat, and at Double-A last season, he owned just a .663 OPS. His calling card is his glove though, and it's incredibly good. If he can play on a rotational basis for the Twins and provide speed on the basepaths, he's got a chance to have major league value.

Outside of these six, there's plenty more deserving candidates, and it will in part be decided by what openings the Twins have. I think Jason Wheeler and D.J. Baxendale both could have contributed to the Twins a year ago, and it would have given the organization to see what they have. Engelb Vielma could be lost as a shortstop due to his glove, and Stuart Turner could be plucked because of his ability behind the plate.

Beyond that, you're looking at players that would take a significant gamble, or that most other organizations have duplicates of. Lewis Thorpe and Amuarys Minier may have some real gusto behind their talent, but injury and development says neither are ready immediately. Guys like Aaron Slegers, Niko Goodrum, Travis Harrison and others are probably well represented by counterparts throughout the big leagues.

The Rule 5 Draft is a few weeks away, and every year, you're not going to see someone like Odubel Herrera emerge. However, an organization's goal is to keep those they see as part of the future, and try to gamble on those they think can squeak through. Come week's end, we'll have a better idea of where the Minnesota Twins stand.
Posted by tlschwerz at 12:59 PM