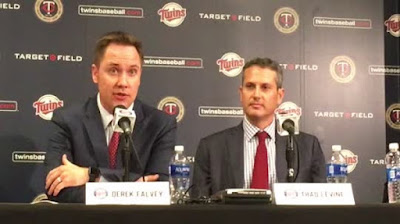 As the second half of the Major League Baseball season gets underway, the Minnesota Twins find themselves in an interesting position. Despite being in contention and owners of a winning record, they sport a -60 run differential and are void of pitching options. A crossroads is appearing, and Minnesota will need to decide how they are going to acquire some arms.

With the trade deadline quickly approaching, it's pretty easy to note that this club should not be in win now mode. That's to say, no acquisitions for rentals should be made, and the goal shouldn't be to contend in 2017. If transactions are coming, they should all be forward thinking and have future value.

So, if that's the plan of action, there's a handful of exciting names that could be on the table. Recently, Ken Rosenthal tweeted the Twins are checking in on controllable starters. This is absolutely the right avenue to pursue. Those names would include the likes of Jose Quintana, Sonny Gray, Chris Archer, Marcus Stroman, Dan Straily, Julio Teheran or even Gerrit Cole. Now, that group (and there's more possibilities that fall under the umbrella) are going to have varying degrees of asking prices. Regardless of what the Athletics try to argue, the likes of Archer or Stroman represents a superior option to Sonny Gray. Cole and Stroman are near the top end of the spectrum, while Quintana and Teheran hover around the middle. Given the differing acquisition cost of each, the Twins will need to tread lightly.

In flipping players, Minnesota will likely be asked for top prospects such as Nick Gordon, Stephen Gonsalves, and Fernando Romero. They could be pushed on Max Kepler, and while there's other names that could draw interest, that foursome probably commands the most attention. Given that level of talent, it will be on the front office of Derek Falvey and Thad Levine to decide if surrendering those players are worthy of making a swap. It's a scenario that will weigh heavily, especially in baseball with another option looming so easily.

It's just money right? Well, that's true to a certain extent, and in an uncapped sport, Minnesota has plenty of it. While you may have disparaged the club previously for being cheap, spending whil the bulk of your roster is subpar doesn't make sense. Given where the organization is right now however, supplementing the roster with a big contract or two could be enough to put you over the top. Sure, the Twins don't have the TV revenue of other markets (meaning the dollars are stretched just a bit further), but they have the means to command the attention of any free agent they covet.

Aside from making a deal with another club, the organization could go with a cost that only requires dollars and cents. Someone like Yu Darvish, with whom Thad Levine is intimately familiar, is a pretty obvious option this offseason. Yes, he'll cost you significantly in terms of cash flow, but he represents the clear upgrade with all of the reasons the Twins as a landing spot just may work.

Given the current landscape of the organization, the window to win has begun to open. Inserting at least one top tier rotation arm will go a long ways to kick it to a gaping degree. If Minnesota can have prospects like Romero and Gonsalves to turn to, as well as a Darvish type, the dollar cost may end up seeming like a moot point as the dust settles.

Should the organization go the trade route, the hope would be that they aim high. Whatever Sonny Gray commands, an Archer, Stroman, or Cole should be more intriguing. If you're giving up prospects, don't stop short of getting the near-guaranteed boost. To deal from youth with a potential to end up looking at another middle of the rotation starter isn't a practice you want to follow.

In the coming weeks, we will soon have a more clear picture as to how the Twins will choose to navigate these waters. There's no denying they need pitching, and they're more than one arm away. The hope would be that they choose to acquire help in a way that not only sets them up to take a step forward, but also doesn't sacrifice any presumed longevity of their winning ways.
Posted by tlschwerz at 7:40 AM