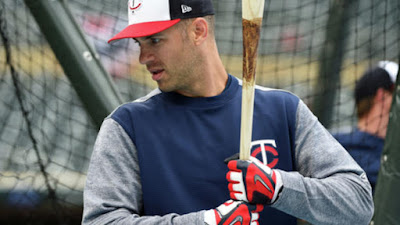 34 years old and in the second to last season of his eight-year deal with the Minnesota Twins, Joe Mauer has given the organization a brand new opportunity. Despite being sapped from the sure-fire Hall of Fame trajectory he was on as a catcher, Mauer has mostly scuffled at first base. In 2017 though, there's a different narrative beginning to emerge. In his current form, Mauer presents some intriguing value to the Twins.

The knock on Mauer at first base has always been that he doesn't hit for enough power to play the corner spot. While that's a fair assessment, he's turned into a premier defender. He's absolutely worthy of a Gold Glove in 2017, and should've been more in the conversation a season ago had he played in enough games to qualify. While the defensive metrics may be fickle, the vast majority tip the scales in his favor. All of that is for another time however, this new opportunity is about Joe Mauer the hitter.

Owning a career .308/.390/.444 slash line, Mauer likely won't be putting up the slugging percentage of his career average any time soon. However, he's shown that when healthy and given regular rest, he's still not someone opposing pitchers should want to face in 2017. On the season, his .287/.360/.404 slash line is the best mark he's posted since the last time he was an All-Star, in 2013. More impressively yet, Mauer's numbers under the hood are relatively gaudy.

It's been a talking point for some time that the lefty has declined greatly against similarly-handed pitchers. In 2017, Mauer has 67 plate appearances against lefties, and he owns a paltry .542 OPS. Against righties however, he's slashed .305/.381/.448 with all five of his home runs, 15 of his 17 doubles, and driven in 26 of his 33 RBI. There's really no other way to put it, Mauer remains a menace against right-handed pitching.

Diving a bit further into the output, Mauer's 34.6 Hard% is the best mark he's posted since 2012, and while he's going the opposite way more often than any season since 2014, he's putting the ball in the air more often (27.6%) than any season dating back to 2009 (29%). At this point, we know groundballs aren't the way to sustainable success in the big leagues, and Mauer has created a perfect storm for himself.

While highlighting the good side of things may seem self serving, the reality, at least to a certain extent, is that's exactly the point. The Twins have an opportunity going forward to be self serving with Mauer. I'd love it if he could pick up the hardware this season and win a Gold Glove. A year from now however, putting him into a full time platoon with a right handed first basemen (with a bit bigger power bat), makes all the sense in the world. Rather than having an above average answer to part of the equation, they'd immediately have a true threat at first base.

We have seen (and probably should've known) that Kennys Vargas is nothing more than a bench bat in a best case scenario. ByungHo Park is starting to turn things around at Triple-A, but there hasn't been much power there, and a handful of question marks still remain. One of the most often called for things off of the Twins bench is a right handed power bat; killing two birds with one stone by asking that player to be a first basemen seems like an ideal scenario.

If there's a necessary caveat to mention in all of this, it's that there's not a ton of options when it comes to lefty-mashing first basemen. Of the impending free agents, you're left with a list of Mike Napoli and Mark Reynolds. The former was a Twins target that's been awful in 2017, and the latter has reverse splits, hitting righties far better (and also has to beat the skepticism of hitting outside of Coors Field).

Regardless of how this narrative plays out, what is certain is that Joe Mauer has given the Twins an opportunity. They can upgrade first base production by pairing him with a partner. He isn't going to sign another long term deal following this contract, but being kept around on short deals after it, he's an asset as opposed to a former aging vet like Torii Hunter may have been.
Posted by tlschwerz at 7:40 AM