Twins Searching Out A Bat? 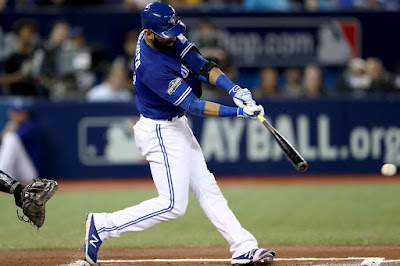 Recently on MLB.com, Jon Morosi wrote a trade deadline buyer's guide focused on hitters. I recently wrote a piece regarding the Twins and how they should attack the deadline when it comes to pitching and prospects. I hadn't considered them adding a bat, but there's a name Morosi mentions that could make some sense. Is this the time that Jose Bautista comes to Target Field wearing the home uniform?

There was some talk over the offseason that Minnesota may have interest in the long time Blue Jays slugger. He would join an outfield better suited defensively, but there's a clear path to regular playing time as the designated hitter. Over the winter, he ended up heading back to Toronto on a one-year deal worth $18.5 million. Now on the hook for just a prorated portion, Minnesota could attempt to entice the Canadian AL East club to send him south of the border.

At 36 years old, and with over 1,000 MLB games under his belt, there was plenty of reason to worry about a downturn in 2017. Now with the season halfway over, the Blue Jays have eaten up most of that risk. Should the Twins, or some other team, trade for him at this point, they'd be getting a player with most of the risk assumed by another organization. Toronto would likely still want a decent return, but unless they are willing to eat most of what's still owed to him, any partner should have strong negotiating position.

Throughout his career, Bautista has enjoyed plenty of success at Target Field. Obviously that comes with the caveat of having faced a good amount of poor Twins pitching over the years. Nonetheless, in 21 games at Target Field, Bautista owns a 1.324 OPS with 14 homers. Obviously playing there full time, those numbers probably decrease some, but having past success to use as a springboard is hardly a bad thing.

Given the Twins current roster construction, Bautista seems to fit as well. While not a good defensive outfielder, he would immediately slot in as the every day DH. He hasn't consistently played first base for some time, but could spell Joe Mauer at the position every once in a while. He also allows Minnesota to upgrade from Robbie Grossman, who while despite being an OBP machine, has gotten exposed with increased playing time.

A lot regarding the landscape of how the Twins attack the remainder of the 2017 season will be determined in the next week or so. With tough series against good teams upcoming, Minnesota will have a much more clear picture as to how they will fair down the stretch. If everything follows along with the status quo however, Jose Bautista remains a name that makes a good deal of sense in Minnesota.
Posted by tlschwerz at 5:50 AM