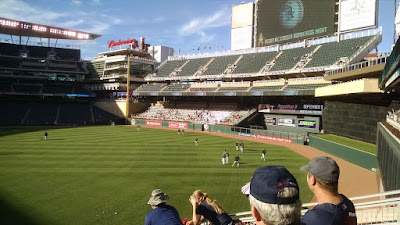 The 2017 Minnesota Twins have been among the luckiest teams in baseball. No matter how you define luck, arguably the most indicative stat in the game is run differential. Despite being incredibly lopsided in that category, Minnesota finds themselves sitting at .500 on August 10. While it creates somewhat of a mirage for the current season, it highlights the excitement that 2018 should bring with it.

Coming into 2017, Minnesota was looking to turn the page on a season that resulted in a franchise worst 103 losses. Despite not being indicative of their true talent level, the organization absolutely had to reverse course. As the development of young players has continued, they've achieved that result, and will begin 2018 with a whole new outlook. A year from now, we should be watching a team with a realistic Postseason opportunity, and there's a few reasons why.

It can't be overstated how volatile young players are at the highest level. Miguel Sano went from a rookie phenom, to a sophomore slump, to now settling in to a slugger that can play adequate defense. Max Kepler has struggled mightily against lefties, but has proven valuable, and Jorge Polanco has been forced to work through his first professional struggles. Throw in the emergence of Jose Berrios and the development of Byron Buxton, and the Twins have a nice set of building blocks.

Next season, Minnesota can afford to add in pieces like Fernando Romero, Stephen Gonsalves, Mitch Garver and a host of bullpen arms with the notion that they'll be taken care of. The roster got younger and more talented at the same time, allowing the group to progress and grow together. There's little doubt that some of the next wave will take their lumps too, but the group as a whole will be better positioned for sustainability than in 2016.

The Depth Of The Division

We are starting to see this play out now, but to begin 2018, only the Twins and Indians will have a realistic shot at winning the AL Central. The Chicago White Sox have already gone into a full blown rebuild, and the Kansas City Royals are an offseason away from watching half of their roster walk out the door. In Detroit, the 25 man was held onto too long, has gotten old, and now will need to be pieced together.

Looking at where each organization is presently, only Cleveland and Minnesota appear to have the pieces for sustained winning in the near future. Even before making offseason moves, the Twins find themselves in an enviable spot within their own division. Consider the fact that they'll play those teams most often, and the Twins could wind up with among the easiest schedules in baseball during 2018.

The Front Office Makes Its Mark

It's been mostly a feeling out period for Derek Falvey and Thad Levine this year, that will change over the winter. Front office personnel have already been shown the door, and the expectation should be that it will continue in the coming months. I'd be shocked if Paul Molitor is back, and there will be other coaching staff changes that likely follow.

While a big league manager may not make an incredible amount of difference, over the course of 162 games, a better option can steal a few victories. Look for Falvey and Levine to bring in people ready to elevate the play of their young roster, and get the most out of them for years to come. Who is put in charge this offseason in key positions, has the potential to bear fruit well down the line.

We could take a look at the opportunities outside of the organization as well, but even before that, it's apparent Minnesota has things going for them. During the winter, Minnesota will be in a position to spend and supplement internal talent for the first time in a while. They can realistically elevate their Postseason positioning by making key and timely acquisitions. Knowing that those moves can be paired with a formula already trending in the right direction; the Twins have to be looking ahead with a smile.

Although the excitement of meaningful games late in the season is back during the 2017 season, it'll be a year from now that the Minnesota Twins should be discussing how their Postseason starting rotation looks. It will actually matter, because they'll have fall games to go and win.
Posted by tlschwerz at 8:58 AM