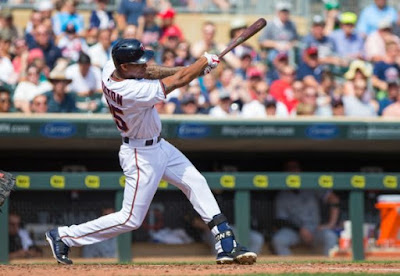 On May 13, 2017 Byron Buxton was near rock bottom. 30 games into his season for the Minnesota Twins, he looked lost at the plate, was batting just .168, and owned a paltry .500 OPS. After an exciting September 2016, his new season had gotten off to a terrible start. Fast forward to today and things have changed, but it's the "how" and "why" that tell the story.

Despite continuing to play otherworldly defense, Buxton was once again scuffling at the big league level. Despite raking at every stop along the way, he just couldn't put it together for the Twins. With only 5 extra base hits through 30 games, and a 4:1 strikeout to walk ratio, things were all going downhill. From the outside looking in, it's not as if there was a point in which things clicked, but small tweaks along the way have now narrated a different story.

Having both added and abandoned the leg kick multiple times over his career with the Twins, Buxton's swing has been a work in progress. At times, he's struggled with plate coverage, and a weak front side has prevented him from reaching and driving the outside pitch. He's continued to work with new hitting coach James Rowson to find something that works, and as the results come, so to does the comfortability. Outside of the physical changes though, we can eye a few trends that have yielded positive results.

Through April, Buxton had a swinging strike rate of 16.1% and was making contact just 65.3% of the time. Both of those numbers are lackluster, and combining them with a 31.8% chase rate, there was little room for success to follow. Jump ahead to August, and Buxton has overhauled two of those three areas. He's swinging through just 11.4% of pitches, and his contact rate has jumped to 76.9%. He's still chasing often, now 34.8% of the time, but it would stand to argue that the reason isn't because he's being fooled.

Like teammate Eddie Rosario, Buxton is somewhat of a free swinger. Now generating more contact and having an enhanced level of success, he's likely finding himself expand the strike zone on pitches he genuinely likes. While that still isn't going to produce ideal results, it's a better practice than flailing the bat head at pitches you've simply been fooled on. In fact, what Buxton's chase rate illustrates, is that his approach at the plate is still a work in progress, and there's even more to squeeze out when it comes to production.

There have been times throughout Buxton's maturation at the plate he's struggled with different zones of coverage. Whether it be not having the ability to turn on the inside fastball, or to drive the outside breaking pitch, plate coverage was a by-product of a breakdown in swing mechanics. As those have begun to correct themselves, the Twins centerfielder has seen an uptick across the board. The next step for him is to settle in even further on pitch recognition, and hit balls in the zone he choose, rather than the ones opposing pitchers dictate to him.

As the confidence has grown, the output has turned more favorable as well. Looking at the first two months of the season in comparison to the last three, quality has taken a significant leap forward. Rather than dribbling balls into the ground, Buxton has generated quality contact with launch angles that give him a chance to do something on the basepaths. His radial charts between the two instances display a night and day difference.

Right now, as a .240 hitter, the Twins have themselves and above average regular. A Gold Glove defender is doing enough at the plate, Minnesota can't complain. Getting up closer to something like .260/.340/.480 would put him in elite territory. It's encouraging to see the process take shape in more than just the month of September, and it's great to know that there's still room to grow. At 23 years old, the Georgia native is probably just beginning to scratch the surface, and the prime that lies ahead of him remains incredibly exciting.
Posted by tlschwerz at 9:30 AM