Nick Gordon and the Tea Leaves 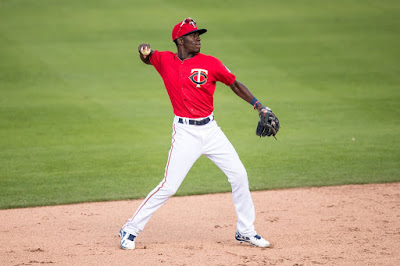 As February comes to a close, and the calendar turns over to March, spring training is well underway for the Minnesota Twins. After an 85 win season took them to a Wild Card tilt in the Bronx, Paul Molitor's club is looking to make waves in the year ahead. Looking to make waves on his own, Nick Gordon seems to have been given a handful of opportunity from the get go this exhibition season.

As of this writing, Minnesota will have played five games in Grapefruit League action, and Gordon has competed in three of them. He's started twice, manning the middle of the diamond with Jorge Polanco flanking him at shortstop. Playing second base in all of his action, Dee's brother and Tom's son has provided some interesting messages to read into.

At Double-A Chattanooga in 2017, Gordon played 104 games at short, while manning second base in just 14 contests. Drafted as a shortstop out of high school, the hope was that his glove would allow him to stick at the position. Now through 415 minor league games, he's started 374 of them at short. Although the expectation was that the bat needed to develop, the early belief is that the glove and arm could stick. With defensive metrics being tracked much more lightly on the farm, we're forced to look at much more archaic forms of measurement. Spanning all of his game action, Gordon owns a .960 fielding percentage to go with 69 errors. The past two seasons, he's committed 24 and 19 errors respectively.

Multiple prospect experts see Gordon needing to slide over to second at the next level. While he has the speed and range at short, the glove and arm have left him susceptible to miscues. If that ends up being the case, the likely outcome is an up-the-middle-pairing with Jorge Polanco. Unfortunately, both of those players would be somewhat miscast for an every day role at short, but Polanco did make strides a season ago. After being worth -8 DRS and posted a -10.9 UZR in 406 innings during 2016, Jorge played over 1,110 innings in 2017 and compiled a -1 DRS and -4.3 UZR.

No. 80 overall prospect Nick Gordon (@Twins No. 4) put his speed on display as he flew around the bases on this RBI 3B, even losing his helmet in the process. pic.twitter.com/qfHrcDSpWs
— MLB Pipeline (@MLBPipeline) February 28, 2018

Currently in Fort Myers at the Twins spring training complex, John Bonnes spoke with Minnesota second basemen Brian Dozier. In his comments, he makes it relatively clear that he's looking forward to his impending free agency. At 31 years-old, he'll be somewhat difficult to hand a long-term, big-money deal. If Derek Falvey and Thad Levine decide to go a different direction, letting Dozier walk could open the door for Gordon to run with the role for good.

There's no reason to believe Gordon's early action in spring training suggests he's got a legitimate shot to break camp with the Twins. Right now, the top prospect isn't even on the 40 man roster. What I do think we are seeing is an early-and-often approach that suggests Minnesota knows he's close. Gordon will probably spend the bulk of 2018 at Triple-A, and could see time at the big league level later in the year. The more he plays alongside potential future teammates however, the easier it is for him to integrate when called upon.

Over the course of recent Twins seasons, there may be no bigger shoes to fill than Brian Dozier's. Nick Gordon isn't ever going to hit anywhere near 30+ home runs in a season, but he could be called upon to take the baton from the Twins All-Star. The more he plays in starting lineups during 2018 spring training should only fuel the fire to make that a reality on a nightly basis when the games count.

It seems to me that Minnesota believes Gordon is very close, and for the player, that should be motivating enough to make 2018 a season to keep an eye on.
Posted by tlschwerz at 7:26 AM