Who Goes North for the Twins 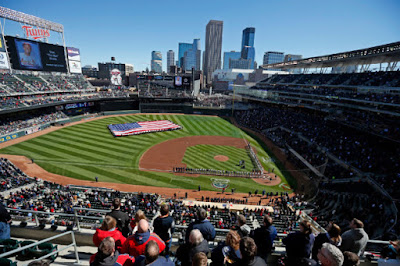 With the Minnesota Twins now involved in spring training action, and exhibition games well under way, it's a good time to take a look at the 25 that will head north with the club at the end of March. Having had significant turnover and uncertainty throughout seasons in recent memory, 2018 brings a breath of fresh air. This club should be relatively simple to project, and that's the mark of a strong team.

Following up a Postseason berth and a strong showing over the course of the 2017 Major League Baseball season, the Twins had a few key areas to improve in order to take the next step. This offseason, Derek Falvey and Thad Levine have executed a near flawless blueprint, and they have the product on the field positioned to make a run for the AL Central division title.

Although not set in stone, there's significant clarity when it comes to deciphering the Opening Day 25 man, and here's a good bet at what it could look like:


Both catcher positions are all but locked in, and the starting combination up the middle should be set. Joe Mauer is inked at first, and Logan Morrison will back him up while serving as the full-time designated hitter. Although Adrianza could be pushed by Erick Aybar for a job, I think the former's best chance to get on the roster is a potential suspension to Miguel Sano. Sano is already set to play the field in spring training games, so his injury recovery should be all but over. Major League Baseball has yet to speak with Miguel in regards to allegations, and no matter what the outcome, I'd think a 30 game suspension is the max penalty. Outside of the third basemen, there really is no level of intrigue here.

Outfielders (4)
This group is virtually locked in as well. The trio of "Nothing falls but raindrops" is a given, and their rotational fourth should end up being Grossman. Zack Granite is a significantly better defender, and would provide a nice speed option on the bench, but he has options remaining and is available to Minnesota at any point in time. I could see Granite forcing his way onto the roster this spring, but the more likely scenario is that Grossman sticks until it no longer works. The Twins would need to DFA him, and doing that before necessary doesn't seem like a pressing matter.

Pitchers (12)
Despite not having Ervin Santana available to them out of the gate, I'd still imagine the Twins go with a full five-man starting rotation. That group would include Berrios, Odorizzi, Gibson, Mejia, and Hughes. The last two spots are somewhat up in the air, but Hughes' contract should afford him an opportunity, and Minnesota would need to see significant improvement from Anibal Sanchez this spring to pencil him in. The relief corps is vastly improved, and that group should be relatively set in stone. If Minnesota is serious about using Duffey as a starter, I suppose a trip to Triple-A could make some sense, in which case Alan Busenitz takes his spot in the bullpen.

Again, in comparison to recent years, this Minnesota Twins squad has the least amount of question marks when looking at Opening Day. Obviously that's a great thing, and a testament to the talent available to Paul Molitor. Having defined roles and positions from the get go is a good place to be, and allows the club to work from depth as situations present themselves.
Posted by tlschwerz at 7:27 AM