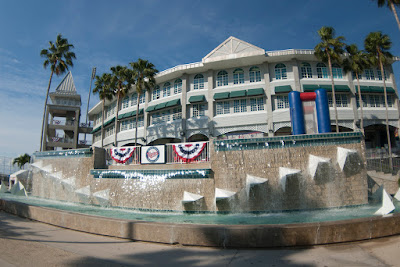 Valentine's Day is here, and the highlight is simply that the Minnesota Twins have begun their first workout. While the Hallmark holiday suggests you go all out for those you love today, pitchers and catchers are active on the diamond in Fort Myers. Rather than get all sappy or dole out presents, I thought it a fun idea to check out some Twins possibilities I love to take place in 2018.

Looking back at the year that was in 2017, and what numbers a handful of Twins players came up with, here's a look into some projections before Vegas sets their marks. While these aren't true over unders, as I'll be looking solely at marks I believe are able to be eclipsed, the same general principle remains.

Let's get into it:

Byron Buxton has his first 20/20 season

20 steals in a full slate is something that Minnesota's centerfielder could likely accomplish running backwards. His elite speed, arguably the best in the game, is more than likely going to swipe 40 bags in the year ahead. It's the homers that are a leap, but I don't think we're diving in too far here. Coming off a season with 16 homers and wasted months, Buxton's true power stroke is real. His 27% hard hit rate has been consistent over the course of his career, and the 14% HR/FB ratio remains relatively static. Buxton's power is probably more predictable than his contact, but it's a gap type drive that produces more line drive longballs. Over the course of his career, multiple 20/20 seasons is something I'd hang my hat on.

Despite having an incredible amount of power, Sano has yet to surpass second basemen Brian Dozier for the team lead in longballs over the course of a given season. In just 114 games last year, he launched 28, and that came on the heels of a 25 homer output the year prior. Sano is going to miss time at the beginning of the year due to a likely suspension, but I'd imagine it'll be 30 games or less. Coming off a leg surgery, it should give him extra time to ramp up and get conditioning to where it needs to be. As a regular in the field, Sano is probably going to be up against it on a yearly basis when asked to contribute for 162 games. As he trends closer to that number however, expect the moonshots to skyrocket.

Max Kepler arrives with an .800 OPS

Call it a breakout, but don't call it a breakthrough. The talent has been there for Max Kepler, and it's time he puts it all together. While he's scuffled at times against lefties even dating back to the minors, 2017 was an abysmal showing. Kepler shouldn't be relegated to a platoon player, but everything needs to continue developing for that idea to be pushed aside. Over the last two years, Kepler's .734 and .737 OPS has shown little growth, but the .947 OPS across 112 Double-A games prior to his promotion in 2015 can't be ignored. Kepler has the potential to be a Christian Yelich type player, which is a strong combination of power and average. At 25 years-old, and two full major league seasons under his belt, the time is now.

Gaining on 50 big league starts, Jose Berrios has yet to show what the best version of himself looks like. As a 23 year-old a season ago, he posted a 3.89 ERA along with an 8.6 K/9 and a 3.84 FIP. Those numbers are already impressive, but there was still command issues that reared their head, and a couple of clunkers that raised the overall water level. Another offseason of refinement, and his first big league season from the get go, should boost Berrios into another level. He'll end up taking over the title as the Twins ace this season, and seeing him post some of the best numbers since Francisco Liriano or Johan Santana should absolutely be the expectation.

This offseason, Thad Levine has commented that the goal with both Gonsalves and Fernando Romero is for them not to yo-yo. The organization doesn't want either pitcher coming up to make spot starts, or see promotions and demotions in less than ideal succession. While there's a lot to like with Adalberto Mejia getting an extended leash this year, the back portion of the Twins rotation still leaves plenty to be desired. Phil Hughes' contract affords him some time, but the impressive lefty has been knocking on the door for some time. Gonsalves probably isn't getting his shot early (unless the door opens on its own), but I expect him to pitch his way up by late summer. Although he may not have ace potential, his stuff profiles with an ability to be a consistently reliable arm every fifth day for some time to come.

Whether enjoying Valentine's Day or not, there's more than a handful of things to love about the 2018 Minnesota Twins, and baseball officially being back is chief among them.
Posted by tlschwerz at 7:34 AM