Call Ups Begin, Who's Next? 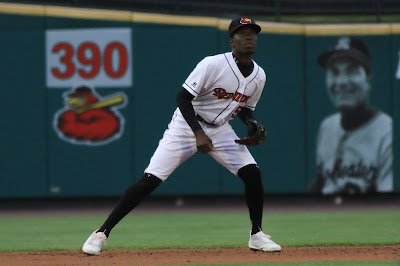 The Minnesota Twins have allowed Kohl Stewart to make his major league debut, and Stephen Gonsalves will now join that company. Fernando Romero got that treatment earlier this season, and it sounds like Paul Molitor isn't suggesting a slow down any time soon. With the Twins out of it in the big leagues, and Rochester all but eliminated at Triple-A, opportunities lie ahead.

Joel Sinner and the Rochester Red Wings play their last game on September 3. From that point forward, Minnesota has ample roster spots and 25 games before the end of their 2018 season. Making use of those games in a way that helps to bring a semblance of clarity prior to 2019 spring training seems of the utmost importance. Although the Red Wings have struggled as a club this season, there's plenty of talent deserving of a big league look.

Here are some names to ponder:

At points during 2018, it seemed Gordon would open the 2019 season as Minnesota's starting second basemen. He posted a .906 OPS at Double-A and was promoted to Triple-A. Since reaching Rochester though, Gordon has struggled mightily. He owns just a .208/.249/.284 slash line and has not seen any consistent success. Even though it may be good for his long term development to get him a major league perspective, it's hard to see Minnesota ignoring that he's been so poor offensively at the highest level of the farm. Gordon is not on the 40 man roster and would need to be accommodated that way as well.

Similar to Gordon, Wade posted strong numbers at Double-A (.837) only to slide at Triple-A (.712 OPS). Wade did miss time this season due to injury, but he's back healthy and playing right now. What Wade does have going for him is that he's an on-base machine. His .357 OBP bolsters his Rochester line, and although there's not a ton of power there, he can be a gap hitter at the next level. Wade swings it from the left side of the plate, and looks the part of a fourth outfielder. He'll likely be in competition with Jake Cave next spring, and both should make Robbie Grossman plenty expendable. LaMonte is not on the 40 man roster either, but adding him wouldn't be a stretch.

After looking like he was on the cusp of making it to The Show last season, a spring training injury derailed his 2017. Now healthy and effective in 2018, it's time the former Oregon Duck gets his shot. Across 40.1 IP for Rochester this season, Reed owns a 2.23 ERA and an 8.7 K/9. He throws hard and should have the ability to miss big league bats. Walks have become more of an issue over the past two seasons, but this could be a late bloomer that settles into the pen nicely. Jake is not currently on the Twins 40 man roster.

At 28 years old, the Minnesota native and former 32nd round pick could see all of the hard work finally come together. Anderson reached Triple-A this season, and has a 3.61 ERA across 52.1 IP. The 13.1 K/9 and 2.9 BB/9 numbers jump off the page, although his 1.4 HR/9 could hurt him at the next level. Anderson isn't likely to be a high leverage guy, but he could find himself turning some heads if the minor league numbers continue to play.

Signed on a shrewd two-year deal by Minnesota, Pineda is being paid just $2MM this season to rehab from Tommy John surgery. He's already made two turns at High-A Fort Myers, and should get starts a couple of rungs up before August comes to a close. The outings have been sharp, and the velocity reports have been promising. He'd need to be reinstated from the 60-day DL, but his 40 man roster spot isn't an issue given he'll be on the Twins active roster in 2019 on an $8MM deal.

The next in line when it comes to bigger name pitching prospects that the Twins have developed is none other than Lewis Thorpe. The Aussie missed two seasons due to Tommy John surgery and then illness, but has gotten back and rounded into form nicely. He made 22* (one with an opener) starts at Double-A this season and posted a 3.58 ERA. His 10.9 K/9 was plenty impressive, and he handed out walks at just a 2.5 K/9 rate. Thus far, Thorpe has made one start at Triple-A, and he turned in a quality outing. Lewis is coming up on a 40 IP increase from 2017 and could be shut down soon, but if Minnesota wants to get him a turn in the majors, he is already on the 40 man.

Acquired from the Mariners this season, De Jong did pitch 28.1 innings for Seattle early in the year. Since joining the Twins organization, he's made four appearances (two starts) totaling 22.0 IP for Rochester. The 3.68 ERA is respectable and he's posted a pedestrian 7.4 K/9. I'm not sure there's much in the form of strikeout stuff here, but De Jong should be plenty capable at the back end of a rotation. He's already on the 40 man and it seems he's ready to get a few big league turns. Obviously the Twins liked him enough to target him as a trade piece, and there should be opportunity for him to get a look in September.

For most of the guys mentioned, Derek Falvey and Thad Levine would need to facilitate 40 man roster moves. Luckily the Twins have plenty of options in that regard. Ervin Santana and Matt Belisle can both be placed on the 60-day DL. Logan Morrison could easily join that dup, and depending on how he's progression, Aaron Slegers could find himself there as well. It's too late in the year for a DFA of Robbie Grossman to make sense, but Johnny Field could soon see that fate if a spot is needed.

While the club plays out the rest of the string, there should be plenty of new and fresh faces seen on the diamond for Minnesota. Getting some early answers for the year ahead would be a very worthwhile undertaking.
Posted by tlschwerz at 9:01 AM