The Price of Doing Business 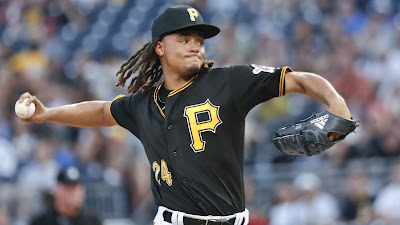 Today, the Pittsburgh Pirates and Tampa Bay Rays completed the deal that sent Chris Archer to the Buccos. With a PTBNL up in the air, Shanez Baz ended up being the final piece to the blockbuster. This whole situation remains relevant in the context of the Minnesota Twins due to conversations surrounding the Rays former ace and Minnesota slugger Miguel Sano.

Over the summer there were multiple headlines that linked the two organizations with regards to trade talks. Twins fans were down on Sano coming off injury and poor decisions this offseason. Even with those developments however there seemed to be plenty of voices that hoped Sano could be the centerpiece of a swap. 1500 ESPN's Darren Wolfson quickly shot that down suggesting Tampa had "no interest," and there should've never been a belief to the contrary.

Fast forward to where we are today, and we've now seen it took a trip to Single-A Fort Myers for Miguel to once again look motivated in the big leagues. Weight issues aside, his buy in and commitment towards being as great as he can be has long been the crux of his issues. Making the large leap, based on a very small sample size, that he's on the right track now, plenty still remains up in the air for Sano.

Regardless of what Sano rounds into though, and even considering that being an All Star level slugger, Tampa was going to command a haul. Tyler Glasnow, Austin Meadows, and Shane Baz have all appeared on national top prospect lists. Giving that trio some Minnesota context, the Rays would've been targeting something along the lines of Fernando Romero, Alex Kirilloff, and Stephen Gonsalves. Even if you don't know prospects, that's a group of names that likely ring a bell for most casual Minnesota followers.

The reality of the situation is that while Archer hasn't yet reached the pinnacle of what you'd hope he can be, there's a strong possibility that an ace level talent lies within. At 29 years old, he is under contract through 2019 and the combined $20MM in team options through 2021 are more the team friendly. Simply put, there isn't a pitcher on the open market that will equal Archer's level of enticement for the next couple of seasons.

This is really a situation where hindsight isn't necessary. Miguel Sano was never going to be enough to land Archer, but it was silly at the time and is now as well. Had the Twins shifted to include the prospect package above, things would be quite dire given the performance throughout 2018. Although this same squad should have a very real opportunity to compete in 2019, it's players like those mentioned in that prospect package that should begin to establish themselves as regular big leaguers in 2020. Having Archer while depleting the system and not seeing the fruits of those labors would be a tough pill to swallow.

It'll be interesting to see how this all works out for the Pirates. Pittsburgh still has some nice pieces on the farm, and they've graduated some solid players, but they're in a middle ground that I'm not sure Archer solves. Tampa is chasing the top of a very good division and adding that much talent is going to make the road much easier for them in the future.
Posted by tlschwerz at 1:14 PM