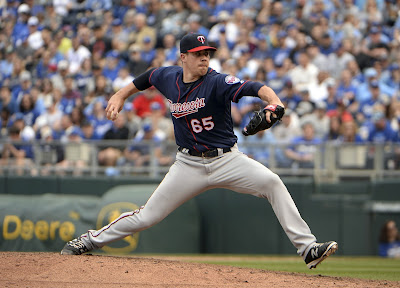 The Minnesota Twins went the route of signing multiple veterans on one year deals to supplement their relief corps for 2018. Now that the season has taken a different turn, all of those players have been shipped out to greener pastures. For 2019 and beyond, a goal of the organization has to be finding the next Trevor Hildenberger or Ryan Pressly. As things stand currently, there's a duo of dandies that have begun to stand above the rest.

Whether or not the Twins have a proven closer going into 2019 isn't of much worry to me. More importantly, does the club have a handful of guys capable of pitching in high leverage situations. Despite his stumbles at times down the stretch, Trevor Hildenberger has rounded out into exactly that type of player. Addison Reed will return for year two, and the hope is that he'd rebound to look more like his former self. The Twins should be feeling that they can turn to the likes of Trevor May and Taylor Rogers in those situations as well.

Rogers was an 11th round pick back in the 2012 Major League Baseball draft. He's now 27 years old and in his third major league season. Despite posting a 3.44 ERA (which is higher than the 3.07 mark from 2017), his secondary numbers are outstanding. The 2.41 FIP is a career low and comes in 15th among all qualified big league relievers. His 10.3 K/9 is a full strikeout higher than his career average, and his 2.2 BB/9 is a new career best as well.

As a lefty Rogers has proved serviceable against hitters from both sides of the plate. Left-handed hitters have zero chance, owning just a .422 OPS, but the .781 OPS to righties isn't awful either. He's giving up both the fewest hits and homers of his career, and it's hard to be anything less than excited about his outlook.

Owning just 93.8 mph average velocity on his fastball, it's not that Rogers is much of a flamethrower. With his long and lanky stature, he has a good bit of deception working in his favor. The arm slot hides the ball well, and he can get in on hitters in a hurry. I'd prefer not to see Minnesota tab Rogers solely for a 9th inning role, but he's far more than a standard LOOGY as well. Deploying him in a role similar to Ryan Pressly, just a fireman to get guys out, should yield plenty positive results.

From the other side of the glove, the recently rehabbed Trevor May has been fantastic. It's just been 9.2 IP over the course of 9 appearances, but May is laying waste to opposing hitters. An 11.2 K/9 is enticing, but the 1.9 BB/9 is a new career best that really jumps off the page. Working solely as a reliever in 2016 prior to Tommy John surgery, May's profile had a lot to like. The strikeouts were there, and the FIP suggested the 5.27 ERA wasn't entirely his fault. That said, he was giving up too many walks (3.6 BB/9) and the 1.5 HR/9 was a problem.

There's reason to like May's profile as a starter, but it's hard to ignore what he can provide out of the bullpen. On the season, he's generating whiffs nearly 20% of the time, and hitters are chasing his pitches just under 40% of the time. He's shaved 10% off of his allowed contact rate (63%) and the nearly 95 mph fastball velocity matches up with where he was prior to surgery.

Acquired as a top prospect years ago, Minnesota likely had visions of May being an impact starter. If he's capable of providing this profile in a more lengthy role that's one thing, but if he's a back end option I'd prefer to see him stick in relief. May has the repertoire and output of a guy who can close out games in the 9th, or be an upper echelon setup man. Again, this is a very small sample size thus far in 2018, but continuing through September would only give steam to the hype train.

Heading into 2019, the Twins will need to solidify a rotation that has more questions than answers once again. The bullpen has been an area needing improvement in recent years though, and seeing some internal arms step up and take command is more than encouraging. It hurt to lose quality pieces this year, but credit those who have stepped up and made the most of new found opportunity.
Posted by tlschwerz at 8:17 AM