Joe and Kirby Can Co-Exist in Twins Lore 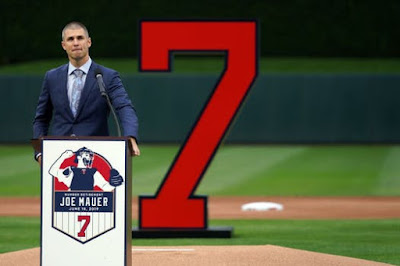 Justin Morneau addressed the throng of Minnesota Twins fans gathered at Target Field on Saturday night. There to celebrate the retirement of Joe Mauer’s jersey, it was the other half of the “M&M Boys” that offered some thoughts. Among his comments Justin noted that Joe’s favorite player growing up was Kirby Puckett. The star of yesteryear is thought fondly of, while the one currently receiving organizational praise is heavily scrutinized. It’s probably time to put down that cause and appreciate them equally.

Puckett was the Willians Astudillo of decades ago. He was the short and stocky athlete that allowed every man, woman, and child to believe their major league dreams weren’t so far out of reach. Puckett didn’t toil away in the minor leagues though, as he was a man who performed admirably on the highest stage. A batting champ, 10 time All Star, six-time Gold Glove winner, and member of two World Series teams, the peak was as good as there ever was. The result was a Hall of Fame induction and years of post-playing career celebration.

The parallels between the Twins hero that was and the one that was before run so deep. It’s in that reality that the need to divide the two remains so unfortunate.

Twins fans will never stop wondering what Puckett’s career may have been had it not been cut short due to Glaucoma. Those same fans will never have to guess what Mauer’s career looked like after a brain injury changed his trajectory forever. One of the two saw his days on the diamond end immediately, only to be instantly celebrated with a Hall of Fame induction at the first opportunity. The other was forced to remake himself, miscast in a new role, and playing on a contract offered under different circumstances. A similar crossroads was approached, but next steps moved the two players in opposite directions.

There’s certainly something to be said about achieving the ultimate goal, a World Series title in baseball. That’s not an individual accomplishment in this sport however, even with the highlight reel offerings provided during both stretches. Puckett contributed to those trophies while Joe was never presented the same opportunity. It’s probably in those accomplishments that the division begins.

Whether you like analytics or not, Puckett’s career was worth a total of 44.9 fWAR, or roughly one spot higher than Mark Texeira on the all-time leaderboard. Joe Mauer topped 50 career fWAR, and while he played three more seasons, the time at first base was largely to his detriment. The most obvious parallel between these two is their injuries and how one was ended and the other was changed.

We’ll get to a point in the next five years where Joe Mauer’s Hall of Fame candidacy becomes a reality. Writers will need to put pen to paper, and the decision will come down to whether a catching career reminiscent of Johnny Bench is worthy of induction. He was the best in the game for roughly a decade, but following injury, played out of position and over his head in a role miscast for his skillset. Where Puckett got benefit of doubt regarding his injury, Joe will be judge because of his.

It’s fair to wonder what if for Kirby. Although he was set to be 36 years old in 1996, coming of an .894 OPS season doesn’t suggest that regression was close. A first ballot inclusion likely would not have been the result, but future celebration was sure to come. The reverse narrative will need to work in Mauer’s favor, and a campaign pushed by those in Twins Territory should be what fuels that fire. Rather than continuing to debate a contract signed under different circumstances, or a personality that didn’t jump off the page, celebrating the greatness that was should be a unifying discussion.

Players like Kirby and Joe don’t come along often for organizations. Even those that are the best rarely sustain that production for this type of length, and for every All-Star selection there is, very few push the envelope towards a Hall of Fame discussion. When each new ballot comes out, and there’s an opportunity for a bronzed cap to be added in the halls of Cooperstown, it should be something we all find excitement in.

Joe Mauer’s favorite player was Kirby Puckett. Puck might have considered Joe one of his favorites as well. You can bet that Kirby is waiting to welcome Joe into The Hall, and its time Twins fans get on board with that movement as well.
Posted by tlschwerz at 9:11 AM