Lift Proving to be Final Key for Kepler 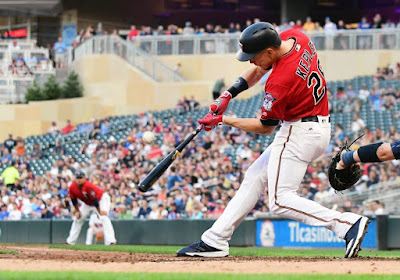 Max Kepler used to be relatively vocal about his decision to avoid an increased launch angle. He wasn’t looking solely to hit home runs, and while his goal was to enter the zone on a level swing path, he was just fine with ground balls. Former Twins beat writer Mike Berardino talked to the outfielder back in the spring of 2018 and Kepler said as much there. Now he’s become one of the best outfielders in baseball, and it’s because he’s changed his approach.

Max Kepler’s launch angle progression throughout his career is a thing of beauty.

At 18 degrees this year, Kepler is finally optimizing his swing for his ability to hit the ball hard.

Baseball has transitioned to a sport where getting lift on the baseball provides the optimal route for success. As the game invokes shifts and the ball is now juicier than ever, lifting the pill over defenders is the most direct path to generating extra-base hits. Although this may not be a direct focus for Kepler, it’s a principle that James Rowson has impressed upon Twins hitters and it’s one Max is putting to use.

In 2019 Kepler owns an 18.5 degrees average launch angle. Last year that mark was 16.2 degree and in 2017 it sat at just 12.6 degrees of lift. Launch angle on its own isn’t conducive production, but Max has paired it with an enhanced exit velocity as well. The 90.9 mph mark this season improves upon an 89 mph mark last year and an 88 mph tally the season before. Summarizing it easily, harder and higher is producing the best results of his career.

The percentages reflect what we are seeing in the raw data as well. Kepler owns a career low 35.7% ground ball rate and a career best 18.3% HR/FB number. His 42.6% hard hit rate is nearly seven percent higher than his career average and over a five percent improvement from 2018. Despite chasing and whiffing a bit more often, the contact rate is right on par with career norms and contact within the zone is a career best 93.9%.

The #MNTwins signed Max Kepler to a 5yr/$35MM deal this offseason.

The #MNTwins signed Jorge Polanco to a 5yr/$27.75MM deal this offseason.

Through just 70 games played Kepler has the 7th best fWAR total among outfielders. He’s the second best in the American League trailing only a guy named Mike Trout. Minnesota saw the value in their German native this offseason and extended him for $35 million over five years. Fangraphs estimates his worth as already being over half of that mark ($21.8MM).

When you hear launch angle from a place of scrutiny it generally is assumptive of the idea that players are simply swinging up through the zone attempting to get lift. The practice is built around creating hard contact on the bottom portion of the baseball. A level swing can still be utilized with the point of contact being honed in. Combining lift with an enhanced exit velocity is where the power stroke comes from. As balls are being thrown harder than ever, they’re also being put in play at a similarly increasing velocity.

Minnesota’s instruction may not have transformed Kepler’s swing plane through the zone, but it’s certainly worked to adjust the contact point and process when putting the ball in play. Regardless of if the baseball leaves the yard, Kepler is hitting the ball harder and longer than ever before. It’s because of that fact he’s experiencing a jump in performance and the Twins look to be the benefactor of belief over the next five years.

Posted by tlschwerz at 8:46 AM