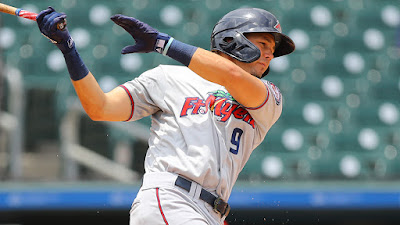 Tonight the 2019 Major League Baseball draft kicks off with the first round. Minnesota will make their lone selection at the 13th pick, and while that doesn’t include the hype of a #1 selection like Royce Lewis, there’s plenty of talent to be had in that spot. For the best team in baseball, who also employ one of the strongest farm systems, this is about strengthening the future. Amateurs will be able to take another step towards the goal, and the organization can execute a plan months and years in the making.

Before getting to know some of the newest names entering Twins Territory, it’s worth taking a quick look back at where the players selected a year ago are today. Minnesota had nine selections in the top 10 last year. Here’s how they’re doing:

Larnach got to Low-A Cedar Rapids in 2018 before starting this year at High-A Fort Myers. He got off to a slow start for the Miracle but has been on a tear of late and now owns a .304/.377/.479 slash line on the season. The bat has looked impressive in every stop and given his advanced hitting profile at Oregon State there’s no reason to believe he won’t be at Double-A Pensacola in short order.

Like Larnach, Jeffers ended 2018 at Cedar Rapids and began this season at Fort Myers. Initially splitting time behind the dish with fellow prospect Ben Rortvedt, Jeffers has now assumed the role of the guy. He has a .281/.347/.431 slash line and has looked the part behind the plate. Some scouts were concerned about his ability to stay at catcher, but so far results have been encouraging. Power should also play a bit more which will help to raise the current SLG profile.

Unfortunately for Keirsey, a significant amount of his pro career has been spent on the Injured List. He’s played in just 42 games since being drafted and is currently at Low-A Cedar Rapids. He put up a respectable .798 OPS for Elizabethton last season, but there’s little to go off from a sample size here.

Quite the steal in the 5th round, Sands has enjoyed a strong 2019. He didn’t pitch after the draft last year but has already earned a promotion to High-A Fort Myers. Across eight starts for Cedar Rapids Sands posted a 3.05 ERA with 10.7 K/9. Recently the former Seminole twirled a strong debut start for the Miracle. This is a prospect whose arrow is pointing straight up.

After the draft Mack was assigned to the GCL. He got in 30 games with a .588 OPS as an 18-year-old. He’s in Extended Spring Training right now and will play in one of the short-season leagues for the Twins. This was a long-term play and Mack is still working on development.

After pitching for short-season Elizabethton in 2018 Winder began 2019 with the Kernels. He owns a 2.98 ERA across his first nine starts and has a sparkly 1.086 WHIP. He’s not currently a big-time strikeout arm, but more of that may come. He’s been among one of the best starters for Cedar Rapids and certainly could push for time with Fort Myers yet this season.

All Williams has done is hit since being drafted. The former Clemson Tiger posted an .872 OPS with Elizabethton in his first 62 games last season and has followed it up with an .860 OPS through 37 games with Cedar Rapids this year. Williams blasted 15 dingers in 2018 and has reached eight thus far on the season. A strong plate discipline is evidenced by his K/BB ratio, and any increase on his batting average would have him pushing that OPS into elite territory.

Garry Jr. was one of the more impressive looking athletes this spring down in Fort Myers. He played in the GCL last season following the draft and posted a .476 OPS in 33 games. Just recently turning 19-years-old, there’s plenty of time for this development cycle to take place. Right now, he’s in EST and will play for one of the short-season teams.

Another high-school pick by the Twins, Grace pitched in six games for the GCL club last year. He posted a 5.06 ERA across just 10.2 IP. There isn’t much of a sample size to analyze here, but that will change as he gets another taste of short-season ball under his belt. Grace has a strong trunk and lower half. Expecting him to add velocity in the coming years in a pretty good bet.
Posted by tlschwerz at 2:05 PM