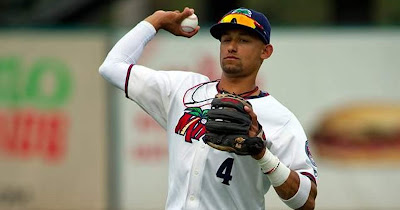 It’s that time of year again, and with the 2019 Major League Baseball amateur draft in the books we can update the prospect rankings. After picking 13th in the draft this season the Twins took more of a developmental approach with their first-round pick. Going heavy on college players following that selection the system gets much deeper. With early season performances influencing those already into their pro careers this list has some movement to it.

My Top 15 Prospects were last updated in December prior to the season starting. You can see that list, as well as the others dating back to 2016 below. Also, in this offering, I’ve expanded the total names to go 30 deep. While those names past 15 don’t have any breakdown, know that they are certainly names worth monitoring.

Dropping a couple of spots from the first 2019 list, Raley’s positioning is indicative of a strengthened system. He has posted an .878 OPS for Triple-A Rochester and is right there with teammate Brent Rooker when it comes to a big power bat. Unfortunately, he just dislocated his ankle and is going to miss significant time due to surgery. He’ll return late this year and hopefully end on a high note.

His first full season in the Twins organization has been spent entirely at Double-A Pensacola. The 5.25 ERA isn’t good, but the FIP and xFIP numbers suggest that’s not indicative of true performance. His 9.6 K/9 is impressive, and the walks are below his career average. There’s lot of life on this fastball, and he could pop up to make a splash for the big-league club as early as this season.

Starting the season on the shelf Gordon has just 26 games to his credit thus far. He got out to a quick start and has continued to produce for Triple-A Rochester. The .784 OPS with an ok OBP is about what you should expect from the contact bat and speed profile Nick possesses. At this point he’s probably more 2B than shortstop, and while he may be a big league regular, it’s becoming less certain that happens here. Gordon could push for his debut later this season if he continues along this path.

Originating from Forest Lake, Minnesota Wallner was selected with the Twins first round compensatory pick. He’s a corner outfield bomber from Southern Mississippi that should have an advanced approach at the dish when getting to the next level. He’s played in the Cape with wood bats previously and could take a similar path to that of Trevor Larnach.

After quickly jumping up draft boards the high schooler from California found himself going to the Twins in the top half of the first round. Announced as a SS but likely destined for the hot corner, Cavaco’s bat is going to be what carries him. He possesses an above average defensive profile at third but should continue to display pop as he further develops his frame.

Recently promoted to Fort Myers after making eight starts for Cedar Rapids this season, Enlow has turned in 18 strong innings with the Miracle. The strikeout numbers aren’t quite there yet, but he’s continued to work on both control and command. Just 20 years old, Enlow remains one of the most exciting developmental pitching prospects in the entire organization.

Putting more distance behind his missed time, Thorpe has turned in 11 starts at Triple-A Rochester this season. While the 5.95 ERA isn’t good, he’s been much better of later. The 11.3 K/9 and 2.3 BB/9 are beyond impressive, and if he can keep the ball in the park the numbers really pop. I’d expect a major league debut to come at some point in 2019, and he’ll have a real chance to be a difference maker being more than your traditional soft-tossing southpaw.

A model of consistency over the past two seasons, Duran has struck out 10+ per nine while walking roughly three over the course of his last 31 starts. He’s just 21 years old and can pump his fastball towards triple digits. Finishing at Low-A Cedar Rapids in 2018, he’s made 10 starts for the Miracle this season. There’s an outside chance he could progress to Double-A this year. Minnesota is stockpiling some fireballing arms to be sure.

The Canadian has seen a rise like no one in the Twins system this season. After a strong 2018 for Cedar Rapids as a 19-year-old his 2019 has only taken him to new heights. Making four starts for the Kernels before a promotion to Fort Myers, Balazovic owns a ridiculous 13.1 K/9 and 1.7 BB/9. His 2.09 ERA is beyond impressive and the body of work spans 51 innings. He’s still so young and is going to blow by his previous career innings totals, but if he keeps this up there’s no reason to think another challenge is out of the question.

Having made it through plenty of setbacks over the course of his early career, Javier is finally healthy and on the field for the Kernels. He’s got as good of a chance as anyone to stick at SS defensively, and this is one of the best prospects in the system. He hasn’t leapt out to a fast start at Low-A Cedar Rapids, but we’re dealing with a sample size under 15 games thus far.

The 2018 first round pick was drafted for his bat and since turning pro all he’s done is hit. Making it to Cedar Rapids in his debut season, he began 2019 with High-A Fort Myers. In his first 61 games he has an .863 OPS and has displayed a very strong approach at the plate. At 22 he could be pushed with a new test getting to Pensacola in the next couple of months.

Taken in the first round of the 2017 draft Rooker has done nothing but crushed his way through the minors as well. Now 24 and at Triple-A Rochester, he owns a .908 OPS through 35 games with seven longballs. The exact positioning at the next level is still up in the air, but this is a power bat that doesn’t have a ton of swing and miss and is going to rake anywhere he goes. A Twins debut this season isn’t beyond comprehension.

Pitching all season at Double-A despite being just 20 years old, Graterol has been dominant in his nine starts. A 1.89 ER and 8.7 K/9 are both plenty to marvel at. He needs to hone in the command some, but for a guy who can hit 100 mph on his fastball there’s just so much to like here. Unfortunately, he’s shut down with a shoulder impingement, but the hope is that there’s no long-term damaging effects.

It took some time for Kirilloff to get healthy and into action starting 2019, and then it took a bit more time for his bat to warm up. Across his last 11 games for Double-A Pensacola however, Kirilloff owns a 1.033 OPS and has six extra base hits (two homers). He’s a great athlete who has hit in each stop across the minor leagues and expecting the numbers to climb as the season goes on is a very good bet. He’s probably missed the window for 2019 time with the Twins, but 2020 should have him more than ready.

Entering the season as a top 10 prospect across all the big leagues Lewis has scuffled a bit in his second tour with High-A Fort Myers. A .726 OPS in 46 games last year has been followed up by a .606 OPS in 62 contests this season. The plate discipline has worn down a bit with walks not being as plentiful. He’s also tallied less extra base hits and seen the power production take a dive. Just recently turning 20, Royce is still so young and remains and elite prospect who should stick at shortstop as he rises the ranks. It’s time for him to adjust, but there’s no reason to believe he won’t.
Posted by tlschwerz at 9:10 AM