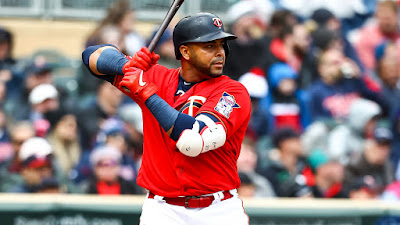 This winter two free agents jumped out at me as being obvious fits for this Minnesota Twins team. Marwin Gonzalez with his positional flexibility and Nelson Cruz for his big bat seemed like perfect fits for a lineup needing to fill some holes. Despite Cruz getting up there in age, he hadn’t shown any signs of slowing down and the only question was whether that would carry over into 2019. Now beyond the halfway point I think we have all the answers necessary.

After a National League swing in early April a handful of Twins fans popped up questioning whether the long-time designated hitter still had it. Through the first game of an April 20th doubleheader against the Baltimore Orioles Cruz owns a .268/.412/.415 slash line. He’d hit just one home run and wasn’t looking like the guy that blasts 30 dingers with ease. If the 17-game sample size wasn’t enough to suggest it was too soon, then the four-hit nightcap that day should have been. After game two of the doubleheader Minnesota’s DH owned a .326/.446/.609 line and the rest may be history.

With 78 games under his belt the newly turned 39-year-old has posted a .980 OPS for the Twins. That’s the best mark over any full season in his career. Slugging over .600 for the first time he’s got a career high there as well, and the .375 OBP is even with his high-water mark set in 2017 with the Seattle Mariners.

ZiPS projected Cruz to post an .848 OPS in 2019 and saw him hitting 30 home runs. While the slash line will remain in flux through the end of the season, he’s already at 26 and is tracking towards 40 long balls for the fourth time in his career, and first since 2016. Obviously, the golf ball-esque baseball doesn’t hurt anything for a big-time power hitter, but Cruz is still doing plenty of this on his own.

You don’t have to search far to find Nelson’s name on hard hit leaderboards. His 12.3 barrels per plate appearance are second in baseball behind only the Yankees Gary Sanchez. His 94.2 mph average exit velocity trails only Aaron Judge and his 54.4% hard hit rate is the best in the sport. Roughly one-third of the balls he puts in the air leave the yard, and a good portion of them seem to go into orbit. If there was an expected decline to come, Cruz himself seemed to miss the memo.

Looking at the body of work really isn’t to suggest this is uncharted territory for Cruz, he’s had better seasons. In 2015 and 2016 with the Mariners he combined to post a total of 9.4 fWAR. It’s fair to assume production would slow as you age, but this is going to be a better year than he had as a All Star for the 6th time last season and could conceivably reach a 4.0 fWAR baseline.

The Twins got Cruz for $250k less than the Mariners paid him a season ago, and the $12MM option in 2020 looks like a forgone conclusion at this point. He’ll be 40 next July and if we can take performance in this campaign as any indicator, the only thing going over the hill will be a boatload of bombas.

Posted by tlschwerz at 1:30 PM