How Good Is Noah Syndergaard? 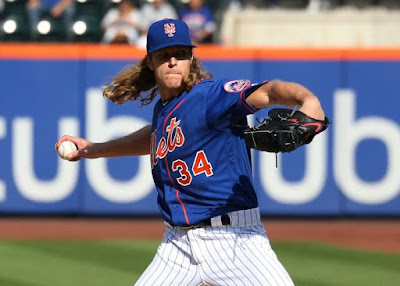 The Minnesota Twins are going to be scouring the trade market for the next few days as they look to supplement their big-league club. Relief pitching will be the main focus, but adding a starter makes some sense too. I am out on trading real assets for rentals, but a controllable arm could be more than enticing for Derek Falvey. The premiere name out there is the New York Mets Noah Syndergaard. 2019 has been a down year, but just how good is he?

Commonly known as Thor, Syndergaard is a controllable asset through the 2021 Major League Baseball season. He’s costing the Mets just $6 million this season on an arbitration deal, and that figure will rise slightly each of the next two campaigns. After posting a 2.93 ERA through his first four big league seasons he owns a 4.33 mark in 2019. Much of that is on the Mets being the worst defensive team in baseball however, as his FIP is 3.64.

Drafted out of high school there’s a lot to like with Syndergaard. He has worked in the majors since his age 22 season and has consistently been among the best pitchers in the sport. Yet to win a Cy Young or make multiple All-Star teams, his best years are likely yet to come. Unfortunately, he’s never been completely healthy and has pitched over 180 innings in a season just one time during his five-year career. When he’s on the mound it’s must watch action, but you have to believe in his ability to stay there.

Looking under the hood we can generate a better idea of what Thor actually brings to the table. His 98.2 mph average fastball velocity is right in line with career norms, and he’s one of the hardest throwing starters in the game. The career 13.2% whiff rate is solid and while he’s down to 12.5% this season, that’s still a strong floor. Generating a ground ball roughly 50% of the time over the course of his career and giving up hard contact less then 30% of the time, it’s a batted ball profile that should generate success.

To address some of the 2019 concerns we can probably start first and foremost with the slider. Although Syndergaard can blow his fastball by many big-league hitters, it’s the breaking pitch that keeps them off balance. For whatever reason he went from utilizing the slider 20% of the time all the way down to 12% in 2019. He’s throwing his fastball more than at any point since 2016, and he’s sprinkled in a bit more changeup usage. Working with him on what is a dominant secondary offering is probably part of the puzzle here.

Because he’s gone to a straighter offering more often, batters are more than likely able to hone in on the zone. We some evidence of that in his chase rate this season. Down to a career low 31.5%, opposing hitters simply aren’t offering at pitches outside of the strike zone. Despite not being egregious by any means, that input has also led to a career high 73.8% contract rate.

At the end of the day it’s pretty difficult to argue against the merits of a 26-year-old fireballer that throws a ton of strikes and limits walks. Sure, the overall numbers are down some in 2019, but it appears that all the stuff is still there. Expecting Wes Johnson to help unlock everything all at once is a pretty good bet and getting a guy like this that can be worked with for a significant period of time would really bear some fruit.

Organizations like the Twins really have to determine their path when looking at how to best position themselves for an ace. Derek Falvey swung for the fences on Yu Darvish as a free agent a year ago, but ultimately stopped shy of matching the Cubs offer. Regardless of that deal now looking bad, the Twins being the frontrunner on the premiere free agent starting option seems like a foolish bet on an annual basis. You can certainly draft and develop talent, but that’s also not a straightforward process and one that takes an incredible amount of time. That only leaves the trade route.

Dealing for a guy like Syndergaard is going to hurt in the form of prospect capital. The Star Tribune’s Lavelle E. Neal suggested that New York has asked for both Alex Kirilloff and Royce Lewis, which should not happen, but any deal is going to be steep. At some point it becomes whether the front office wants to deal in dollars or prospects, and for Syndergaard the latter may be worth genuinely exploring.

Posted by tlschwerz at 7:52 AM