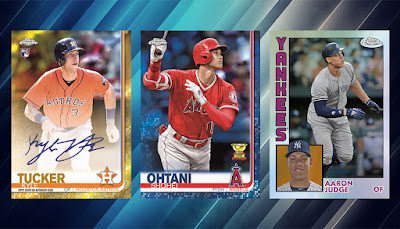 Each year there are certain products from Topps that collector's circle on their calendar. While there's products that come in all across the pricing spectrum, it's the flagship design that typically draws the most interest across the board. Making an appearance with a shiny finish is the allure of Topps Chrome, and the slight border should provide plenty of unique looks for the 2019 offering.

From a checklist standpoint, Topps Chrome is traditionally about the big name rookies. These are some of the cards you'll want to hold in hopes of rising value down the line. Unfortunately for Twins fans neither Jake Cave or Willians Astudillo represent that contingent, but on your search you could certainly land a Vladimir Guerrero Jr. or Fernando Tatis Jr.

Typically in this space there's an avenue to break down base, insert, and hit offerings targeted towards the Minnesota Twins. This time around there's not an opportunity to do that as the checklist is extremely light. Nabbing seven different base cards the subjects include rookie cards for Astudillo and Cave, with the veterans being Kepler, Polanco, Buxton, Berrios, and Rosario.

Just four insert sets are included in the product, so it's not a huge change of pace. No Twins make it into any of those groupings however, so it's simply base and hits. From an autograph standpoint Cave, Astudillo, and Stephen Gonsalves are all signers in the rookie autos checklist.

The one other hit inclusion is an interesting one. At one per case the Debut Gear Relics are somewhat of a chase card. Limited to 140 total cards plus an assumed four printing plates, Brian Dozier appears in this checklist. Now with the Washington Nationals, the chrome offering of what should be something to do with his 2012 memorabilia could be a nice little offering.

Releasing during the first day of the 2019 National Card Collector Show, 2019 Topps Chrome Baseball will again be a product to seek out. Simple yet attractive design makes rainbows in this product some of the most attractive to go after.