Yankees Enter and No Twins Care, Literally None 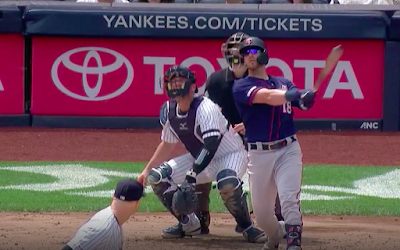 Every single time the New York Yankees square off against the Minnesota Twins you hear the statistics. Minnesota has been dominated by the Evil Empire. Ron Gardenhire’s division winning teams consistently found their season cut short by Yankees lineups. Whether at Target Field or the Metrodome, Twins fans have long looked at these series and circled them to highlight impending doom. Now leading the AL Central, I can all but assure you that when the Yankees filter into the opposing dugout this evening the number of Twins players caring about historical relevance will be zero.

Two years ago, a Paul Molitor Twins squad popped up out of nowhere to win 85 games. Not much was expected from that group and grabbing the Wild Card spot was a surprise to plenty within the organization. Jumping out to a 3-0 lead after their first at bats the Twins quickly gave back the runs only for the dust to settle with an 8-4 defeat. That starting lineup included just four regular starters from this current squad. The leadoff batter moved to the National League while the number two batter has retired to his couch.

It’s in the turnover that this discussion of history really goes to die.

Rocco Baldelli currently manages a very good Minnesota Twins squad. They lead the majors in longballs, have pitched above their heads for over half the season, and even with a slight downtick in production, employ the third best offense in the sport. All those things are factually true right now, today. C.J. Cron, Jonathan Schoop, Nelson Cruz, Mitch Garver, and Marwin Gonzalez have never faced the Yankees in a Twins uniform. Each of those players are directly responsible for the great season Minnesota is having and that impact will be felt much more than the numbers Justin Morneau or Michael Cuddyer compiled against New York.

If there’s a significance in this series, it’s that the two teams are good and playing against good opponents should provide somewhat of a measuring stick for a club. The Yankees have taken over the title of best record in the American League and having won five of their last six contests. Aaron Boone’s team hasn’t been on the road since the All-Star Break, but they do own a solid 26-17 record away from Yankees Stadium. Minnesota is an even 30-19 both at home and away, but having dropped the series 1-2 in the Bronx, will look to at least end the season total with a split.

There’s also a get right opportunity here for the Twins in that the Yankees employ just the 13th ranked starting unit in baseball. New York has scheduled two lefties in the matchup and that plays into the hands of the righty bombers for the Twins. Producing a full run less per game over the past couple of months, favorable pitching matchups should be something this group salivates over.

At the end of the day this series is a big one for both clubs. Each of these teams is looking to improve their positioning for the stretch run, and they’ll be looking to notch quality wins against quality competition. Call the Twins and underdog if you’d like, but no one on either side of this matchup is worried about what has taken place in previous years. Minnesota has tracked towards one of the best teams in organization history, and while that’s uncharted waters on its own, so is the writing of their story against the club leading the AL East.