Showing Off The Twins 2020 Season 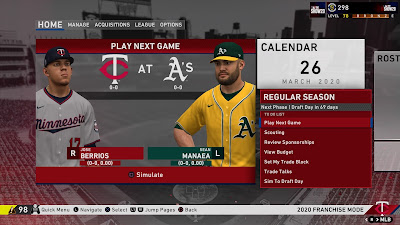 Tomorrow was scheduled to be Major League Baseball's Opening Day for the 2020 season. Jose Berrios was to toe the rubber against the Oakland Athletics in California. Thanks to COVID-19 none of that will happen, but I'm determined to live out the season we were promised.

Eventually, things will return to normal. As with any bit of adversity, finding a way to rise above and conquer will present the ultimate prize. Until we reach a period in which baseball returns to the real-life diamond, it's MLB The Show that we'll need to live vicariously through.

On Twitter I teased this a few days ago. Currently I'm running a daily thread of the 2019 blasts the Twins sent into the seats. Starting tomorrow, I'll be simulating the day's game on MLB The Show 20 and providing box scores and stats to catalog the action. First pitch against the Athletics was scheduled for 3:07pm CT, so look for the box score around 7pm.

This #COVID19 can get bent, and what better way to beat it into submission than with a bunch of bombas.

Starting today, we'll count down to the end of this thing with a daily video of 2019 #MNTwins dingers.

Without playing any of the games myself, it will be interesting to see what the video game sees happening over the course of a season. Baseball Prospectus' projection system, PECOTA, tabbed Twins second basemen Luis Arraez as the 2020 batting champ. Interestingly enough, Out of the Park Baseball 21 suggested the same result. Will The Show follow suit?

One thing I am hoping for is that we don't make it through all 162 games. I'd prefer there be live action sooner rather than later. At this point we're looking at summer as a best case scenario, but any amount of season is better than one being wiped off the map altogether. The Twins were set up to do something special this year, and now while it all hangs in the balance we must wait.

Hopefully this is something we can all rally around together, enjoy some fun, and see a virtual depiction of the Minnesota Twins make a run at a World Series title.
Posted by tlschwerz at 8:31 AM