What If Jake Odorizzi Is Minnesota’s Impact Arm? 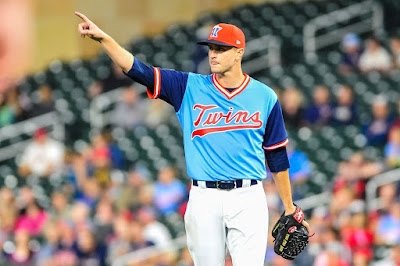 Despite an opportunity to hit the open market after the 2019 season, Jake Odorizzi returned to the Twins on a $17.8 million qualifying offer. It ended up being below market value and could be even more of a coup if Odorizzi continues trending towards the impact arm this rotation covets.

One of the best moves the new regime has made since taking over was flipping middle infield prospect Jermaine Palacios to the Tampa Bay Rays in exchange for Odo. Palacios is 23 years old, still at Double-A, and hasn’t posted an OPS north of .600 since 2017. Jake meanwhile had a career year in 2019, has wholeheartedly embraced data, and could be on the verge of a next step the pushes him into the upper echelon.

How did all that come together? Well, Jake made some key strides in other areas obviously. His 93-mph average velocity was nearly two ticks up from 2018. At 29-years-old, he was adding oomph, and he’s been an early adopter of new technology. With that heavier fastball he was able to post a 12.7% whiff rate (career best) and batters made contact just 74% of the time against him.

Assuming consistent gains is an inexact science. While peak performance falls along different places on a bell curve, Odorizzi’s age 30 season should drop within the realm of peak performance. Looking for competitive advantages as he has been vocal about doing, alongside an infrastructure designed to push the envelope, there should be a perfect storm for Odorizzi and Wes Johnson to marry.

ZiPS projects Odorizzi to be right in line with Jose Berrios at the top of Minnesota’s rotation. His 109 ERA+ would lead the team among players on the Opening Day roster, and a 9.5 K/9 suggests a belief in 2019 performance. A 4.09 ERA would be a step backwards, but the 4.02 FIP holds a level of consistency across the board.

Ultimately Jake has put together back-to-back seasons with a 3.00 ERA just once in his career, and the later was a step off the former. At this point though, I think it’s safe to say we’re dealing with a redesigned set of inputs. Add in the fact that Odorizzi is once again pitching for a contract working on just a one-year deal and squeezing more out of that next opportunity is a very clear goal.

I think you can make a very easy argument that the Twins have a great level of starting pitching depth overall. The focus has always been on acquiring or developing the top tier arm. It’s assumed that Jose Berrios would embody that reality, and that’s a good bet, but Jake Odorizzi being right there with him seems equally as promising.

Zack Wheeler was the guy everyone understandably looked the part of a projectable arm entering this winter. Minnesota brought back the guy that outpitched him and has plenty of momentum in his corner as well.
Posted by tlschwerz at 11:57 AM