Tale of the Fifth Starter Tape 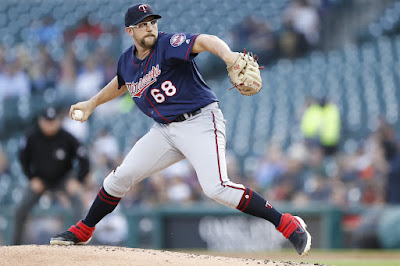 There are not many question marks on the Minnesota Twins 26-man roster coming into the 2020 season. Jake Cave and Willians Astudillo are in contention for the final bench spot, and the rotation has turned into a two-man race. How do Randy Dobnak and Jhoulys Chacin stack up?

Coming into the spring there’s no denying the Twins hope was to have the veteran Chacin make this decision easy. Forget that Dobnak was the game two starter during the 2019 ALDS in Yankees Stadium, he’s a guy that showed up out of nowhere and has options remaining. The caveat though, is that he is the one continuing to force Minnesota’s hand.

By now you know the story. Former Uber driver that played through all three levels of the farm in 2019 while posting a ridiculous 2.07 ERA, he’s the fun-loving guy with the handlebar mustache. Although he deviates from the traditional strikeout hurlers of today, he’s also incredibly strong with both his control and command. In not allowing hitters to beat him with big innings, he’s pitching in front of a lineup that will always give him a chance.

After arguably his worst spring start, Dobnak now own a line of 10.0 IP 5 H 3 R 3 ER 3 BB and 6 K. Dominant, maybe not, but he’s looked the part of a big leaguer ever single time he’s stepped on the mound. Again, with the Twins hoping to unlock the 2018 Milwaukee Brewers version of Chacin, this wasn’t likely part of the equation.

The long-time vet was an absolute mess last year. Jhoulys posted a 5.79 ERA while walking everyone before being jettisoned from The Crew. He landed in Boston and things actually got worse. Contributing just north of 14 IP, he tallied an ERA north of 7.00 and continued giving out free passes for frequently than an ice cream man at the playground.

Looking to rekindle the arm that produced a 3.50 ERA in 192 innings during the 2018 season, Minnesota made a smart decision by nabbing him on a non-roster deal. Given his big-league experience, the assumption should have always been that the final rotation spot out of the gate was his to lose. He’s been projected as such in each of my roster breakdowns in this space, but it’s becoming ever harder to do so.

After his last outing Chacin has now totaled 8.0 IP in Grapefruit League play for Minnesota. Although he does have a solid 8/2 K/BB, he’s given up seven hits, plenty of hard contact, and six earned runs. To say that hitters have rarely been fooled by his stuff would be accurate.

Obviously as a newly developed pitching institution, there’s plenty of tweaks the Twins are working on with the Venezuelan. Between analytical deep dives and scrapping of offerings, the goal has been to rekindle a career under the tutelage of Wes Johnson and the infrastructure that Derek Falvey has built. So far, the fruits of everyone’s labor have yet to produce anything ripe.

We’re probably still too far out to call this race over, and still with an option Dobnak is going to need to be head and shoulders above his competition. Right now though, it’s inaccurate to call him anything but the most productive candidate, and once again the taxi driver is weaving his way through traffic.

Posted by tlschwerz at 1:23 PM