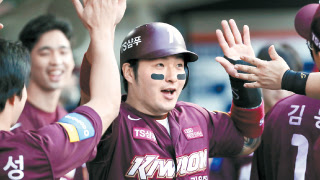 When the calendar turns to May 5 over in Korea, we will officially have the Opening Day we never knew was necessary. Thanks to COVID-19 shelving Major League Baseball thus far in the United States, we are clamoring for sporting outlets. The NFL Draft drew massive numbers, and The Last Dance draws wonderfully on ESPN. Now, if you stay up late enough (rise early enough), we’ll get KBO action.

It’s been weird to think about so little to cover as it relates to the Minnesota Twins or Major League Baseball I’d have numerous opinions and thoughts on the entire league, as well as the focal organization as a whole, but we have few things in the vein of new developments. That’s left Off the Baggy a bit light, as well as doing a similar number on go-to Twins site Twins Daily.

Recently there however, I did write about a Minnesota slugger we never got to see in all his glory with the Twins. ByungHo Park was both injured and then ineffective when he traveled to the United States in hopes of continuing his KBO production. It was a perfect storm of unfortunate events and it never worked out for either party. Now back in his homeland, Park has been the pride of the KBO power production once again.

ESPN will air six KBO games per week. Here's the schedule for this week! pic.twitter.com/QB0mb9srDZ
— Jared Diamond (@jareddiamond) May 4, 2020

Unfortunately, we won’t get a chance to see the Kiwoom Heroes on ESPN in the first week of broadcasts. The network is broadcasting one game a day and Kiwoom did not make the cut. For Opening Day central time zone viewers can catch first pitch between the NC Dinos and Samsung Lions at midnight. Karl Ravech and Eduardo Perez will be on the call.

I’m looking forward to staying up for the experience, and any form of baseball is better than the state we’re currently in. It will be interesting to see how the KBO game is received here, but I certainly hope that it’s batflips proving a key component to defeating this virus and the boredom brought on by it wiping out sports.