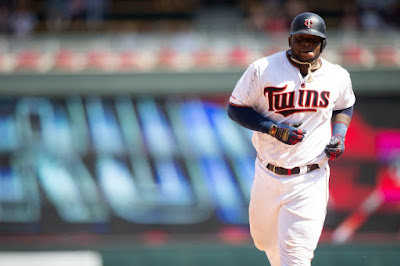 Take some time to watch Ballplayer: Pelotero during quarantine. Everyone has plenty of that right now and remembering the mega-prospect a teenage Miguel Sano was should not be lost on anyone. Now today, on his 27th birthday, we get to look back on what’s been accomplished.

Through parts of five Major League seasons Sano has amassed 8.5 career fWAR. He was in the running for a Rookie of the Year award, has made an All-Star Game, and surpassed the 100-career homer plateau. He’s also been asked to play right field, suffered significant injury, and experienced a demotion from the big leagues all the way back to Single-A.

To suggest Miguel Sano’s career with the Twins has been eventful would be putting it lightly.

Here’s the thing though, we’ve been given more than a glimpse into the reality that the mega-prospect was worthy of all that hoopla. No, he’s not the skinny shortstop that he was way back in those Dominican days, but that was also never the expectation. He’s since moved from the hot corner to first base and plays the part of a hulking corner bat. He’s the definitive member of a team dubbed the “Bomba Squad” and his efforts of late rewarded him to the tune of a $30MM contract extension.

It would always be hard for a guy with Sano’s profile to create substantial value in multiple avenues of the game. He’s an average defender at best, and he now plays a non-premium position. Should he assume Nelson Cruz’s designated hitter role in the years ahead, that becomes even more of an accepted reality. At the plate though, he’s one of the most feared hitters in the game, and since buying into his ability the production has only taken steps forward.

The argument I’ve always made in relation to Sano is that there was never a talent issue. He’s got the ability to be one of the best power hitters in the whole sport. What has always held him back was the reliance on that fact, rather than the execution and effort in order to accomplish it. Maybe it was the guidance of Nelson Cruz, maybe it was the leadership of Rocco Baldelli, or maybe it was Sano himself deciding he was done settling; any or all of those things could be true, but we’re at a point where the Twins are getting the best version of a player they’ve long hoped for.

With his new contract, Sano is in a good position to break some team records. https://t.co/o3kH69zhKz
— Matthew Taylor (@MatthewTaylorMN) May 11, 2020

Sano has already vaulted himself up organization leaderboards. Only Tom Brunansky had hit more home runs through their age 26 season than that of Sano. He’s got the ability and time to become Minnesota second best home run hitter ever, and he’s already suggested that his desire would be to play out his entire career in Minnesota.

We’re way too far off to make any determinations regarding the dust settling, but I think it’s pretty hard not to be excited about what is yet to come. Finding ways to play himself out of a lineup spot, or lacking commitment to produce at anything but his best, are both hopefully behind him. If those realities remain true, then the entirety of the Twins organization will be in store to reap the benefits of this guy for many years to come.

Happy 27th Miguel, and here’s to lots of fun ahead.