Mike Trout Winning Off the Diamond 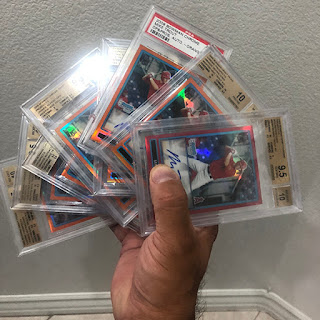 Goldin Auctions actually crashed twice while auctioning off this card. Per the Action Network it sold for $900,000

During this global pandemic one thing that has seen a massive boost in the sports world is collectibles, or trading cards, affectionately categorized as The Hobby. With something for everyone, and fans of every sport, your bound to find a way to pique your interest. In the modern baseball world, the Angels outfielder is king, and Mike Trout did it again over the weekend.

As the unquestioned best player in the game today, Trout holds a special place at the top of the modern baseball card collecting ranks. His base cards transcend “common” status, and his rarer pieces fetch exorbitant prices. It’s the 2011 Topps Update that has become his iconic rookie issue, but some of the prospect cards, namely the 2009 Bowman Chrome Autograph, have driven the market bonkers.

This ended up selling for $525k


Back in 2018 the eccentric Dave “Vegas Dave” Oancea grabbed Mike Trout’s 2009 Bowman Chrome Superfractor 1/1 autograph for a cool $400,000. He noted having turned down offers near $1 million and said he was sitting on it until a $5 million offer came through. You’ll have to excuse his crass nature in the video, but it appears his statements aren’t nearly as outlandish as one may have assumed.
On Sunday night a 2009 Bowman Chrome Red /5 Autograph of Trout’s wrapped up through Ken Goldin’s auction house. That card brought in $525,000 and obviously doesn’t reach the same height as a 1/1. Assuming the red that was sold wasn’t Oancea’s, he too owns one of those cards as well as a handful of the orange version numbered to 25. To say the man is sitting on a mountain of Mike Trout moola is probably putting it lightly.

This explosion isn’t just in a single card though. ESPN’s The Last Dance brought tons of buyers for Michael Jordan cards out of the woodwork. Trout’s standard base issue 2011 Update has gone from a $500 card last February to a $3,000 card today. Topps has been rolling out limited print to order Project 2020 cards with different artists and the early offerings are now in such demand the price exponentially multiples on the secondary market before each card even gets into the hands of collectors.

You should never view pieces of cardboard as an investment similar to that of a stock or bond. However, classifying trading cards as pieces of cardboard is also severely missing the point if you know what you’re looking for. The return is not there for every purchase, but it’s become more than clear the hobby has a place in today’s current culture and it certainly looks like it will be here to stay.

Only a select few people are interested in buying a baseball card selling for north of $500,000, but you can bet that number grows in multiples as you back off the buy in, and there’s lots of fun to be had at any level. Mike Trout, Michael Jordan, or whoever is the next big thing, you can bet their faces on cardboard will attract plenty of fans.
Posted by tlschwerz at 11:05 AM