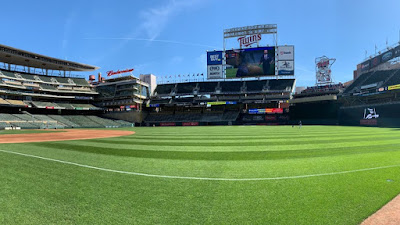 We’ve made it, we have finally made it. The long-running national nightmare seems to be nearly over. On Friday night we will have a Twins baseball game that counts. Back in late June I projected the 30-man Opening Day roster for Minnesota. A few changes have been made and it’s time for an update.

While Summer Camp has been relatively uneventful for the Twins, there have been a few key developments. Thankfully, Byron Buxton’s injury scare doesn’t seem like it will hold him back. Luis Arraez also tweaked his knee but when then immediately all systems go. Miguel Sano got a late start due to COVID-19 tests despite being asymptomatic, but he’s been back for a few days now as well.

Only Nick Gordon and Willians Astudillo remain on the COVID related Injured List for the Twins. The former was never likely to make the Opening Day roster, while the latter definitely opens up a spot for Rocco Baldelli. Having just requested his release, rotation candidate Jhoulys Chacin also generates an opportunity for someone.

Let’s get into who should be expected to make the club:

No surprises here. Astudillo is still looking to generate two negative COVID-19 tests which makes him ineligible to participate. With a catcher being available every night on the three-man taxi squad, carrying two to open the year is just fine.

If there’s a guy that benefits from Astudillo’s absence, it’s probably Travis Blankenhorn. I loved what he could’ve provided during regular Spring Training, and think his skillset translates perfectly to a year needing depth. He can play second and third base while also having some outfield flexibility. The bat has pop and while he’s not a top tier prospect, there’s plenty of talent to contribute at the big-league level.

This group adds one to it in the form of LaMonte Wade Jr. He’s had a strong Summer Camp and is showing that he’s more than just an on-base machine. Minnesota doesn’t have a true replacement in centerfield outside of Max Kepler, but both Cave and Wade should rotate in on the corners prior to any activation of the top prospects.

As has always been the case, this one is as easy as it gets. Minnesota’s leader is ready to go following a very strong Summer Camp

No changes here from the original group, but Jake Odorizzi slides back at least a spot in the rotation due to back stiffness. He’s going to have his last Summer Camp appearance shifted, and he’ll likely be moved off the Saturday game in Chicago.

This group decreased by one with me no longer including Lewis Thorpe. I think the goal would be to have him throwing regular pens and staying stretched out at the alternate site in St. Paul. He was the first rotation option jettisoned during original Spring Training, and both Dobnak and Smeltzer are ahead of him still. Would have been nice to include Chacin as depth, but he’s miscast as a long reliever anyways.

There you have it, your 2020 Minnesota Twins
Posted by tlschwerz at 7:43 AM