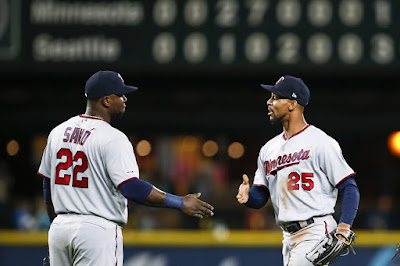 There’s no denying that the Minnesota Twins are one of baseball’s most exciting teams. Their bullpen should rank among the league’s best, and the lineup is one that provides envy to virtually every other group out there. Kicking off a weird 2020 season though, they may need to make some changes.

When Byron Buxton went down in a heap after tracking a fly ball on Monday night the worst was feared. Fortunately, it’s just a mid-foot sprain, and while that may have some lingering effects, there’s still reason to believe the recovery could be sooner rather than later. Unfortunately for the Twins, their starting first basemen is uninjured but has yet to show up to Summer Camp.

Miguel Sano received a positive test diagnosis upon returning to Target Field. Quarantined and awaiting two negative COVID-19 tests before his return, the runway to ramp up for the season is running out. The Twins travel to Chicago in five days, play an exhibition against the Cubs in six, and open their 2020 campaign against the White Sox in eight. Calling a return that quickly rushed would be putting it lightly.

So, where does that leave us?

Let’s tackle the more probable scenario, who plays first base? That answer should be relatively straightforward with utility man Marwin Gonzalez sliding in. MarGo has started 154 games at first base in his career and has logged over 1,400 innings there. He’s still best suited in left field, but there really isn’t a position besides shortstop that he’s overly stretched in. Certainly, Sano’s bat would be preferred, but having Marwin trend back towards the .900 OPS he compiled while listening to the trash can would be a nice resurgence.

Assuming Buxton isn’t back for Opening Day, or even a few games thereafter, Gonzalez is actually piece of that puzzle as well. Sliding Max Kepler to center and filling a corner spot with the utility man makes a ton of sense. With him already in the lineup, the next turn would logically be Jake Cave. While LaMonte Wade Jr. has a strong on-base presence, Cave is the more complete player. He should be avoided in center but has a good enough bat to play on the corners.

Last season Cave finished with an .805 OPS, but what’s even more impressive is having done that after bottoming out at a .615 OPS prior to a May demotion. From his mid-June return through the end of the year he posted an .855 OPS. In 141 plate appearances from July 7 onward he generated a very nice .964 mark. The bat may be inconsistent, but it’s plenty capable.

Both of these should be relatively short-term scenarios. For Sano, we see the effects of COVID-19 and what the virus is going to do to this season. A player with no symptoms tests positive and costs the team their services over a specific stretch of games. In a 60-game season, that missed time could be catastrophic, especially if said player is Josh Donaldson or Jose Berrios.

On the Buxton side, contingency plans in the outfield remain a must for Minnesota. Unfortunate and unlucky as he is health wise, any absence by Byron will need to be evaluated in the short and long term. Immediately a Cave or Wade replacement makes sense. Knowing that him being out of the lineup opens a corner spot, both Brent Rooker and Trevor Larnach could then find themselves in the mix for a more prolonged absence.

Let’s hope we aren’t discussing these scenarios too long into 2020, and their realities are few and far between. Minnesota has a shot at the World Series this year, but they’ll need all contributors for as much time as necessary.

Posted by tlschwerz at 7:06 AM