Devil’s in the Defense for the Twins 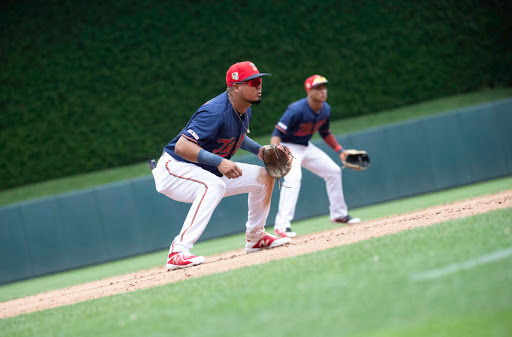 You’ve heard of the Devil being in the details, well finding what advantage the Twins have crafted in 2020 may come from a surprising place, their defense. After finishing 23rd overall in team defense last season, Minnesota currently finds themselves 2nd in 2020.

We knew many of the problems from a year ago. Jorge Polanco was not a good defensive shortstop, particularly coming in on the ball. Luis Arraez was stretched going to his right, and the outfield suffered every game Byron Buxton had to miss. Bringing in Josh Donaldson was expected to be a boost for the infield, and a healthy Buck would be a great remedy on the grass. Not all of that has played out though, and yet, here we are.

Minnesota has gotten just 7 games from Donaldson in his first year with the club. Despite that, their 14 DRS is 3rd in the big leagues and leads the American League. Byron Buxton has already been worth 6 DRS on his own, and while Polanco has been worth -3 DRS, his 0.7 UZR represents the only positive mark of his entire career. Luis Arraez was worth -8 DRS in just shy of 400 innings during 2019. This year, he’s been worth 2 DRS in 157 frames.

This isn’t just an individual player thing though, and it’s clear Minnesota is taking an analytical approach to cutting down base hits. With 322 shifts, or 42.4% this year, Rocco Baldelli’s club ranks 10th in the majors. Last season they shifted just 35.5% of the time. Against righties the Twins are shifting 33% of the time, or virtually the same frequency they did a year ago. Against lefties though, they’ve gone from 36.4% in 2019 to 53.2% in 2020.

Look at how drastically different the #MNTwins shifts are vs LHB in 2020. The dark red for 2B/SS indicate a consistency. They've jumped usage by nearly 20% pic.twitter.com/6R3JcPUJ1f

Thinking about configuration, left-handed shifts also bring some interesting possibilities to consider. Miguel Sano is holding down first base for the first time in his career. He’s been caught a couple of time straying to far from the bag. In a shift however, he’s solely responsible for the line. Luis Arraez, who was challenged going up the middle last season, plays a roving right field with Polanco up the middle to his right. Whether it’s Donaldson or Ehire Adrianza at the hot corner, there’s a plus defender standing near the shortstop hole against a lefty.

In the outfield, Minnesota again has made tweaks with Byron Buxton. In a recent article for The Athletic Aaron Gleeman talked about how the centerfielder is starting deeper than he ever has. With the ability to come in on virtually anything, this gives him the opportunity to find the wall and remain more in control when playing balls near it. Eddie Rosario looks the part of a healthier left-fielder, and Max Kepler asserted himself as a stalwart while pulling double time last year.

Thus far we haven’t seen the Twins offense click on all cylinders, and there hasn’t been a certainty to the entirety of the rotation either. While the bullpen has flashed very well at points, there have been cracks on that front also. If there’s a tried and true narrative for 2020 it’s that this team shows up with the glove. Errors are a dated way to measure success, but from the most basic number the club has committed just two through their first 22 games.

Pitching and hitting can go in slumps, but defense is completely mental beyond the overall athleticism needed to compete. Give it to the Twins for being completely locked in there on a nightly basis.