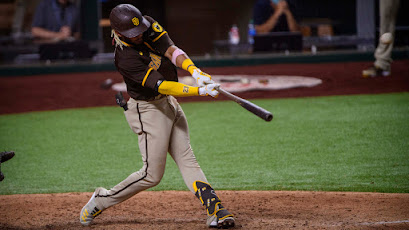 Last night Fernando Tatis Jr. got a grooved fastball in a 3-0 count and sent it into orbit. The San Diego Padres were already up seven late in the game, and with the bases loaded, his grand slam put it way out of reach. Texas Rangers manager Chris Woodward, he of the crotchety old age of 44, took exception to it.

Woodward told reporters after the game, "I didn't like it personally. You're up by 7 in the 8th inning, it's typically not a good time 3-0. It's kind of the way we were all raised in the game. But ... the norms are being challenged." He literally was asking for his opponent to quit playing. After Major League Baseball marketed their young talent wonderfully during the 2019 season with the slogan “Let the kids play” this is where we’re at.

I have no problem with baseball having unwritten rules. I think there’s a certain level of affection I have reserved specifically for the nuances in the sport. By and large though, the vast majority of said unwritten rules are dated and should be re-evaluated. Retaliation in the form of beanballs has long been silly. Bunting late in a game solely to break up a no-hit bid is one I think should draw some ire. If a pitcher wants to get on you for walking unnecessarily over his mound, so be it. Suggesting there’s counts in which the pitcher should know what the batter is doing though, and even further, completely expecting them to give up, is not a good look.

More often than not a 3-0 count results in a take due to the game scenario. Unless the pitch is absolutely grooved, that’s not a situation in which you want to miss and make an out. If a pitcher is going to throw a get-me-over fastball though, by all means the batter should be locked in and ready to ride it into orbit.

When Fernando Tatis Jr. did just that, his own manager Jayce Tingler missed the mark in defending him. Instead of noting that there was a sign missed, he simply could’ve said that he put a great swing on the pitch. Sure, missing signs is suboptimal, but that’s not the talking point in that specific spot. It’s like the basketball coach wanting the guard to work the offense, but he steps back and drains a three, which then causes exhale anyways.

This isn’t the same thing at all.

An NFL team is running clock to preserve their lead. With no timer in baseball, the only constant is outs and runs. There’s zero reason you should stop trying to add one and give into the other. https://t.co/ByJ35oCfM8

There were takes all over the place in the wake of Tatis’ performance. Many of them correctly called out Woodward as off base and old school. Former Twins pitcher Phil Hughes chimed in comparing the situation to that of a football team taking a knee. The difference between all of those types of comparisons however is that baseball is the lone sport not dictated by time. When you’re up against a clock, strategy involved suggests killing the seconds and minutes in order to get you closer to victory. Baseball has outs, 27 of them, all finite. The only strategy when it comes to results in baseball is scoring more than the opposition before your self-inflicted missed opportunities run out.

The face of baseball. pic.twitter.com/Y5VF5EIBKt

Posted by tlschwerz at 9:17 AM