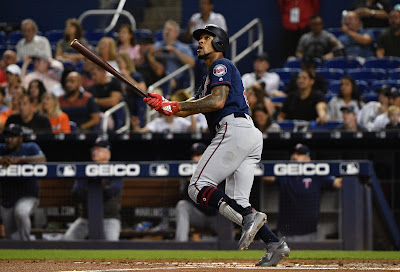 The Minnesota Twins employ arguably the fastest player in Major League Baseball. Byron Buxton looks the part of a gazelle in the Target Field grass. As fast as he is though, it isn’t his speed that unlocks the next level for him, and Rocco Baldelli would be unleashing an absolute unit if the centerfielder can get there.

2020 may very well have been Buxton’s best year in the big leagues. Calling it that comes with some caveats. He was once again injured and playing in just 39 games is more reflective of a strong month. Nonetheless, every organization in the big leagues dealt with a 60-game sprint this year. For Buxton, there was a development I’ve been on for a while that should have Twins fans licking their chops. He has begun coming into his power.

During 2021 Buxton will play the entirety of the year as a 27-year-old. Across the past three seasons he’s gotten into just 154 games, but there’s no denying that talent has turned the corner on with regards to its uncertain arrival. Batting average be damned, Buxton is now a defensive stalwart that contributes at the dish as well. Here’s the caveat, just how much opportunity can he give himself?

It’s there that Buxton’s next act comes. Despite his speed, Byron has never swiped more than 29 bases in a season. Half of his big-league career he’s failed to record double digits, and in two stretches of roughly 40 games at the highest level he’s generated just two. That’s less indicative of a lacking skill as it is reflective of the type of player Buck is. 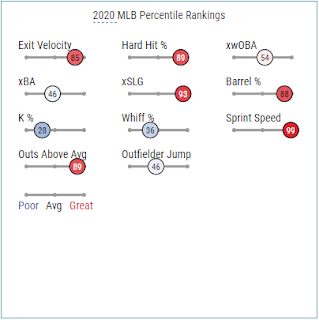 At the plate, Byron Buxton gets off his “A-swing.” He’s somewhat of a guess hitter, and that’s left him susceptible to opposing pitchers having their way with him, but his Statcast profile is reminiscent of teammates like Miguel Sano and Nelson Cruz rather than a player like Dee Gordon or Billy Hamilton. Barreling the baseball as often as he does, Buxton’s prognosis over the course of a full healthy season should be nothing shy of a 25-homer result. His 13 per 39 in 2020 is a 54 over 162 game pace, and while the sustainability is probably not there, being shocked at a 30-home run season would seem to be lacking foresight.

It’s not as though a step forward in plate discipline is beyond reach either. Buxton owns a career 34% chase rate and 14% whiff rate. He was attacked with first pitch strikes nearly 10% more often in 2020 than at any other point in his career, and he took his aggressiveness up a notch on his own volition as well (80% zone swing and 64% swing rates were well over career norms).

Edgar Varela stepped into the role of hitting coach for the 2020 Twins. Lots has been made about James Rowson leaving, and there’s no doubt he was an asset for Minnesota, but it’s not as though Varela’s teaching deviates much from a guy he worked alongside of. If the Twins can get Buxton into a level of comfort when it comes to battling and seeing pitches, what he’s able to do while making contact should only increase. An OBP over .300 would’ve put Byron within sniffing distance of a .900 OPS, and an already dangerous hitter then enters a whole new realm.

There were points this season that Buxton mentioned his desire to steal more bases. It’s unnecessary for him to steal third, and he won’t find opportunity while jogging the bases. The next step forward for Minnesota’s superstar is to sprinkle walks in between the loud base hits and doing so takes him to the tier projected for him as a previous top prospect in all of baseball.

Byron Buxton will always battle the health risks related to his play style, but he’s very close to being among the most productive players in the game, and the Twins should be salivating at that fact.