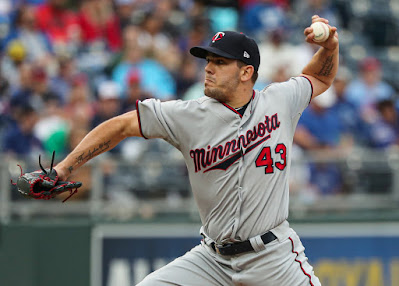 Recently the Minnesota Twins signed veteran starting pitcher J.A. Happ to bolster their rotation. He’d slot in as the 4th starter with where things stand currently, and Randy Dobnak would be the clubhouse favorite to round out the group. It remains to be seen whether or not another move is coming, but there’s a dark horse to eat someone’s lunch.

At the risk of sounding too punny, maybe he’s a dark kangaroo. Lewis Thorpe recently turned 25-years-old and is a former top-100 prospect. He couldn’t be further from that stature right now, but talent shouldn’t be the question. After battling back from Tommy John surgery, and then an extended bout of pneumonia, he put together impressive seasons on the farm. The past two years have been anything but, however he’s worth believing in under one key condition.

I liked Thorpe as a potential contributor to the big-league club when 2020 Spring Training kicked off. He was coming off a 4.76 ERA in just shy of 100 Triple-A innings, but it was largely reflective of the home run ball and his 11.1 K/9 paired with a 2.3 BB/9 was still plenty enticing. Then Florida happened.

No, for Thorpe, it wasn’t the Covid-19 related shutdown. Without divulging too many specifics or risking secondary information, what is publicly known is that he took an extended leave of absence from the team. His parents flew in from Australia and he needed to undergo a mental reset. Ultimately, he didn’t appear in a Major League game until July 26 and contributed just 16.1 innings for the Twins. His 6.06 ERA was ugly and giving up a homer in roughly 25-percent of his innings pitched was not going to play. Again though, the stuff has always been there.

Observing the offseason without having directly communicated with Thorpe, things appear to be trending in a different direction. The Twitter account has been dormant since his birthday in 2020, and his workouts have been shared on different forms of social media. What was at least an erratic presence a year ago has once again subdued as was the case previously.

Whether by his own doing, or a helping hand from the organization, if Thorpe has recalibrated himself, he can certainly be a difference maker on the bump. I was uncertain as to his place within the organization during periods of roster trimming, and there were times that his inclusion in a trade may have even made sense. The pitcher that forced his way into the big leagues in 2019 is a force to be reckoned with however, and Rocco Baldelli can make use of that.

Physically we saw Thorpe’s velocity diminish in 2020. He posted just an average of 90 mph on his fastball. It’s never that he’s been a hard thrower but losing nearly 2 mph at such a young age wasn’t a great development. It was clear that the lack of carry made a difference last season, and Wes Johnson unlocking the tank would be a great step forward for the Southpaw. The Twins ratcheted up his slider usage last season, and that trend could continue for 2021. Looking to regain the whiff and chase rates from 2019 form, tinkering will certainly be valuable as more data is collected.

There’s not reason to believe an ace is in the making here, but right now it’s not Dobnak or bust when it comes to the back end of the Twins rotation. Jhoan Duran and Jordan Balazovic may force themselves in eventually, but don’t count out the best version of Thorpe to make noise before the dust settles.