Under the Hobby Hood: Baseball Cards 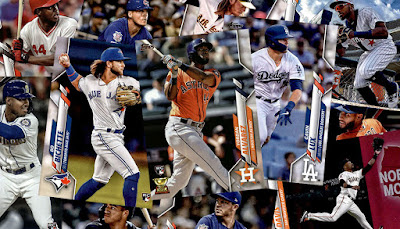 We’re now less than a week away from the release of 2021 Topps Series 1 baseball. Earlier this week I attempted a video Q&A session; it didn’t go well. Given that medium isn’t my forte, I’m hardly surprised. Looking to provide value and accomplish a similar goal, the focus turned to a mailbag instead.

Sourcing questions from readers and followers on Twitter, there should be a very good sample of talking points here. Without delay, let’s dive in.

What's the 2nd best Kiriloff card to get behind the 2016 Bowman?

If you aren’t interested in ponying up for a player’s 1st Bowman card (autograph or otherwise) the next best thing value wise would be considered their first Topps Chrome autograph. Kirilloff isn’t going to be in Series 1 Flagship, instead debuting in Series 2. He should have Chrome autos in 2021, so waiting for those to drop would be the next best thing. Obviously the most economical route will be his Series 2 base card (or any number of the parallels).

Do you, or anyone else on this thread, have any hobby shops to recommend in the twin cities? Pros/cons to shopping hobby shops vs eBay? Every time I check Target or Walmart the shelves are bare. Thanks!

Hobby shops, along with a handful of online breakers, were how I got back into cards. Luckily, we have a handful of options in the Twin Cities area. My go to is Pal’s in Andover, but Real Breaks in Champlin has emerged as a new favorite as well. There’s a store in Golden Valley, and an option down near Woodbury. 2Bros is in Northtown Mall in Blaine, and Three Stars has locations in Bloomington and Little Canada. Hobby shops have the allure of immediate product, and many also sell singles for you to peruse through. There’s also the excitement or joy of just being in that type of environment with like-minded collectors as well.

I bought a couple of Twins cards from you recently, missed out on a couple too. What prompted the steady PC sales over the last six months? You have some great cards.

I have started to downsize my collection for a more focused approach. I only collect Twins, Mike Trout, and Shohei Ohtani. Rather than stockpiling a bunch of base cards I rarely look through, I wanted to make sure I could appreciate what I have. That process worked backwards too in that I had some very nice cards I didn’t display, and them sitting in a box wasn’t desirable to me. I have a new space I am going to be outfitting soon, so we’ll see how things display when I’m done.

Any secrets on when Target stocks its products? How did you get lucky today?

Checking for retail has literally become a crapshoot. Pretty much any time I walk into Target or Walmart I’ll look and anticipate finding nothing. People have connections with distributors or simply wait for product to be put on the shelves. Wax isn’t that important to me since my PC is so narrowly focused. When I open, most of what I pull gets sold anyways. If I’m jonesing to rip something, I typically hit up a hobby shop.

I received this from a dealer as a “toss in” with an order so I don’t know the background. What is more likely, a) It’s a legit PSA 4, or b) it became water stained after grading? (Can water seep into the case?) pic.twitter.com/6HaV5RMq3y

That’s tough as I’ve not heard of water getting into a slab before. However, it’s probably a good reminder about buying the card rather than the grade. In this situation it’s free so you win either way, but not all examples of cards at the same grade have the same appeal. I’ve kicked around buying a 1986 Fleer Jordan in a PSA 1 for a while but wanting the right one to move me before I actually make the purchase.

Posted by tlschwerz at 7:09 AM