Bold Predictions For The 2016 Twins 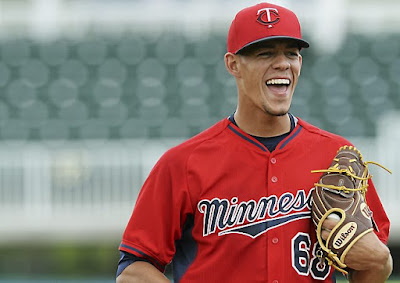 Going into the 2016 Major League Baseball season, the Minnesota Twins have plenty on their plate when it comes to expectations. After having a winning season for the first time since 2010, and making a push for the playoffs, second year manager Paul Molitor will have his hands full when trying to fight off taking a step backwards.

In 2015, the Twins did some things really well, but maybe more importantly than anything, they were handed a good deal of luck. Playing well above average in high leverage situations, and being gifted opportune situations, Minnesota took advantage as well as any team in baseball. Expecting those scenarios to replicate themselves isn't a good bet, so the Twins will need to push the envelope on their own.

Should the Twins find themselves in an opportune position come October, some of the following bold predictions will no doubt have to play out. Without further ado, here we go. Your 2nd annual Off The Baggy bold predictions for the Minnesota Twins:

This offseason, Mauer has spoken off the repercussions he has dealt with following his concussion troubles from behind the plate. Most notably, his vision problems have caused him to have trouble picking up the ball at the plate. Another season removed from the traumatic brain injury, Mauer will hit over .300 for the first time since the 2013 season.

At this point, he's settled in defensively at first base, and now it's time for his bat to come around. The power stroke won't be there, but Mauer should be capable of producing a .305/.390/.410 slash line. He's got extra lineup protection, and if Molitor dropped him in the lineup, an even bigger spike should be expected.

Alex Meyer Will Be An Impressive Piece Of The Twins Pen

In 2015, few parts of the Minnesota roster were worse off than the relief corps. Outside of an unreal first half by closer Glen Perkins, the group struck out no one, and couldn't be counted upon to hold down a lead. This year, flame throwing youth such as Nick Burdi, Jake Reed, and J.T. Chargois should change that. Before all of them though, former top prospect Alex Meyer should make the difference.

Meyer know doubt took his lumps as a starter in Triple-A during the 2015 campaign. Seen by many as a reliever long term though, the tall hurler put it together at the end. Deserving of a September call up, Meyer owned a 0.79 ERA and allowed just a .192/.293/.205 slash line against across his final 10 games (22.2 IP). In that time frame, he struck out 22 while walking just 10. With Meyer, there's always going to be heightened walk issues, but he's also capable of blowing it by big league hitters. 2016 should see Meyer become one of the most untouchable pitchers in the Twins bullpen.

Defensively, you'd be hard pressed to find a better rookie in 2015 than Rosario. He gave the Twins 16 assists, was worth 11 defensive runs saved, and put up a 7.4 UZR (Ultimate Zone Rating). As a defender, Rosario was worthy of the highest praise. Offensively though, the story was much more smoke and mirrors. Despite a respectable .267/.289/.459 slash line, his numbers were bolstered by an unrepeatable 15 triples. The rookie swung and missed just shy of 15% of the time, and chased out of the zone nearly 50% of the time, neither a recipe for success.

Coming to Polanco, the story is virtually the opposite. Forced into playing shortstop, despite arm concerns, due to Brian Dozier holding down second base, Polanco struggled. In 102 games between AA-AAA in 2015, Polanco committed 28 errors at short. In fact, he totaled eight errors in just 19 games at the Triple-A level. His bat has rarely been a question, and his .288/.339/.386 slash across both levels suggests it's major league ready. Unfortunately with the Twins, he's a man without a position.

At some point in the year ahead, Max Kepler should push Rosario for playing time in left field. Should Rosario continue to swing and miss, he becomes a 4th outfielder for the Twins in a best case scenario. With value as high as it may even be, a trade could be the Twins best move. Similarly with Polanco, Minnesota will be forced into a decision. Dozier isn't moving any time soon, and Polanco hasn't given the Twins much defensive hope. Packaging him for some sort of return could be a good bet in the year ahead.

Surprising most of the baseball world, the Twins ended up winning the bid for the KBO superstar. Park comes to the Twins on an incredibly team friendly deal, even if things don't work out. The expectation though, should be that they will. Fresh off of two 50 home run seasons in Korea, Byung Ho brings his talents to the major leagues.

Having struck out 142 and 161 times in the past two seasons respectively, Park is going to eclipse the 200 strikeout mark for the Twins. Major league pitching will present a new test for him, but the 29 year old should also bring plenty of talent to the plate on his own. There's no doubt going to be an acclimation period, but Park surpassing the 30 home run barrier seems like a pretty good bet. Fellow KBO star, Jung Ho Kang smashed 15 homers for the Pirates in 2015 despite playing just 126 games and starting slow. Park, the superior talent, should dwarf that number and have the Twins thanking him for it.

More than any time in recent memory, the Twins have significant pitching depth. With a handful of capable arms, they are looking for some to rise to the top. Enter top pitching prospect Jose Berrios. I expect him to debut sometime in May, and make over 20 starts for the Twins. With that kind of run in front of him, I expect the hard working Puerto Rican to push for Jacob deGrom type rookie numbers.

In his rookie season, deGrom won the NL Rookie of the Year behind a 2.69 ERA and a 9.2 K/9 while walking just 2.8 per nine innings. He gave up just seven homers and pitched just over 140 innings for the Mets. Berrios actually got better at Triple-A (2.62 ERA as opposed to 3.08 at Double-A) and owned a ridiculous 1.08 ERA across his final four starts. Berrios tallied two double-digit strikeout games in 12 Triple-A starts, and added two more starts with nine sat down. Often discounted by national types, Berrios should come onto the scene and immediately be viewed as an ace for Minnesota.

There you have it, your five bold predictions for the 2016 Minnesota Twins. No doubt not all of them will happen, but each of them presents a very solid opportunity for the Twins to bolster their chances at a realistic playoff run. Going out on a limb and suggesting what may be a bit of a reach, only puts the situation in play to be something to strive for. With the Twins bold predictions now handled, I'll leave you with this:

Royals Win The Central, But No Team Wins Or Loses 90 Games

Somewhat similar to my feelings last year on the latter half, I'll give the Royals their due in the former part of this equation. Coming off a World Series win, it's probably time to stop picking against Kansas City. I hate their rotation, and don't expect some of the offensive pieces to be as good as they were (Moustakas/Cain), but that probably isn't enough to knock them out of the top spot.

With no real clear cut favorite in the division, no team should run away with things, or fall too far behind. The Central should be a division that beats up on one another, and a group of teams in which no one is great or equally horrible. What that gives baseball fans is a full season worth of games that all make the outcome incredibly important.

Spring Training is nearly in full swing, and it's time to welcome back Major League Baseball. Here we go.