What Happens To Eddie Rosario? 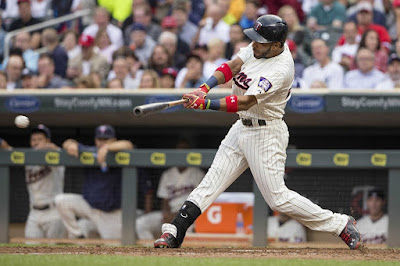 If you follow me on Twitter (and if you aren't you should: @tlschwerz), you know that going into a new Twins season, there's generally a good bit of optimism. While toeing the line far away from being a homer, I generally try to place a good deal of scrutiny on regression candidates going into any given season. A year ago, it was Danny Santana and Kurt Suzuki that could be seen from a mile away. This season, my point of contention has been Eddie Rosario.

The talking point that has been Eddie Rosario has been met with some skepticism. He had a great 2015 campaign, and was an American League Rookie of the Year candidate. Considering my hesitation to heap praise on the rookie standout, I've received plenty of questions like the one below:

@tlschwerz @RandBall Why do you hate on Rosario? We've seen him play well in the majors, while Kepler is still a "prospect".
— Joey Kent (@JoeyKent52) February 23, 2016

That leads us to the crossroads this piece is destined to address. Hate or distaste isn't the right categorization, but why is Eddie Rosario my most logical candidate for regression in 2016 among Minnesota Twins? Here we go.

In his rookie season, Rosario did a lot of things well. His slash line rested at .267/.289/.459. He led the big leagues in triples with 15, and he clubbed 13 homers. Defensively however, is where he showed even more value. With his glove in the outfield, Rosario was worth 11 defensive runs saved, and contributed 16 outfield assists. On the surface, his debut season was a resounding success.

Leaving spring training, Rosario was my pick to be the first of the Twins prospects called up. He looked the part of a guy pushing for immediate 25 man roster consideration, and being a former top 100 prospect, should have been capable of helping a Twins team looking to return to relevance. His narrative played out that way, but also now supports a different narrative going forward.

2015 saw the Twins send Rosario to the plate 474 times, being credited with 453 at bats. Across that action, he walked a grand total of 15 times, and struck out a resounding 118 times. He put together multiple stretches of eight or more games without a walk, including an 18 and 19 game stretch without drawing a free pass. In 35 games last season, Rosario struck out at least twice. Bad enough on their own, the primary numbers were supported by less than ideal secondary numbers.

The Twins left fielder owned a 14.5% swinging strike rate while chasing pitches out of the zone 46% of the time. He was also making contact on just north of 75% of pitches he was taking hacks at. Pitchers also were able to exploit Rosario's free swinging tendencies in challenging him early. He often got behind in counts as he faced first pitch strikes north of 65% of the time.

When making contact, Rosario saw the ill effects of his approach at the plate. Putting balls in play with "hard" contact just 29% of the time, Rosario often relied upon "medium" contact (52.8%) to get him on base. Utilizing his speed, Rosario often was looking to beat out balls with a lower trajectory, hitting line drives or ground balls over 59% of the time. Unlike Santana of 2014, Rosario's numbers were not inflated by an unrepeatable batting average on balls in play (just .332 in 2015).

Now that we have the detractors to put some context to what took place in 2015, it's worth looking at what's next for Rosario and the Twins. For both parties, the floor is a place that can be somewhat comfortable. Going into 2016, Rosario is going to be the Twins Opening Day left fielder, and his defensive prowess should play no matter what. It's his offensive ability that I expect to be the high water mark.

Should 2015 go down as Rosario's best season at the dish, Minnesota will have some decisions to make. No doubt Max Kepler still has to prove his worth at the major league level, but there's significant reason to believe that he will be a far better big leaguer than Rosario. Should Eddie stumble significantly, Kepler is the kind of depth any team would be envious to have. In the scenario that a swap is made, Minnesota should find themselves with an All Star capable type player in Kepler playing every day, and a very solid defensive replacement or fourth outfielder type in Rosario.

If the narrative above plays out, Rosario's story isn't one of complete doom for the Twins. He still serves a purpose even with his 2015 being a mirage. At this point, Rosario could represent a nice trade chip for the Twins, but that's a different argument altogether. It would be nice to see Rosario's approach at the plate change, but for a guy who's displayed a worsening OBP as he's risen through the system, it's not something I'd bet on.
Posted by tlschwerz at 7:01 AM