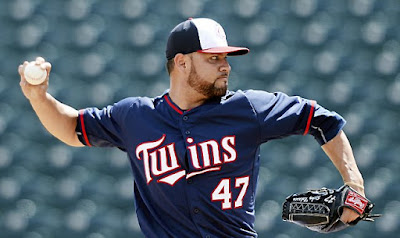 In part, the question has a very simple answer. What's left for Ricky Nolasco is two years and $24 million (with at least a $1 million buyout in year three), at least on a contractual level. The question really is, what's left for Nolasco when it comes to performance going forward? That question is much more difficult to answer, but there are a few clues to consider.

First and foremost, it's worth noting that Nolasco's role appears certain to change for the Twins in 2016. When looking at the starting rotation options, Nolasco can't find himself any higher than sixth on the list. He appears destined for a relief role, even if he's not ready to succumb to that fact. Pitching out of the bullpen could actually benefit Nolasco's wear and tear as well as his production however.

Since signing with the Twins in 2014, Nolasco has pitched in just 196.1 innings. In that time, he's compiled a 5.64 ERA in 35 starts, and owns a 4.15 FIP. His K/9 rate checks in at 6.9 (just below his career average) and his 2.4 BB/9 is just above where he's been for his career. Essentially one full season worth of work, Nolasco has been as bad as he's ever been, and significantly worse than the mediocre to average pitcher he was once in the National League.

Across his career, Nolasco has had standout seasons just a couple of times. Most notably in 2009 and 2013 with the Marlins (and briefly the Dodgers), he posted fWAR numbers of 4.1 and 3.2 respectively. What jumps off the page in that time is just how good Nolasco's slider was.

In 2009, the pitch was worth 9.7 wSL (slider runs above average per PITCHf/x). In 2013, when he was dealt to Los Angeles, it was worth an even better 13.2 wSL. Both of those numbers are easily the best of his career. When looking at the last two seasons with the Twins, Nolasco's slider has been worth -8.0 and 1.1 wSL respectively. The pitch, when working, has kept hitters of balance and no doubt been Nolasco's go to.

When looking at what has gone wrong, it's interesting to note that contact rates haven't really plagued the lifetime National Leaguer. In 2015 (albeit in a small sample size) Nolasco generated the second highest soft contact rate of his career at 20.3%. He did allow a career worst 32.5% hard contact in 2014 with the Twins, and that no doubt played into batters enjoying a very nice .351 BABIP (batting average on balls in play). For Nolasco though, the issues seem much simpler.

Far too often in his time with the Twins, Nolasco has failed to generate critical strikes. No more important than the first pitch of at-bat, Nolasco has posted his two worst first pitch strike totals of his career in back to back years. In 2014, he threw a strike to start an at-bat just 57.7% of the time, and a year ago, that number was an ugly 52.0%. Having to pitch himself back into counts, and play into a hitter's hands, Nolasco was generally fighting against himself. Generating swinging strikes just 9.15% of the time as a Twin, he's put together a recipe for disaster.

As things trended downhill for the Twins during their 90 loss seasons, a staple of what Ron Gardenhire and Rick Anderson were once about had gone by the wayside. Getting ahead in counts and pounding the strike zone seemed much more likely the oddity rather than the norm. Nolasco is an embodiment of that continuing to take place, and it's no doubt plagued him to the tune of two very poor years with Minnesota.

With the reality that the bullpen appears to be his 2016 home, a change in execution is an absolute must for the California native. Despite not walking batters, Nolasco absolutely can't afford to fall behind in relief. The reality is that if he can reverse course on his current trend, things could actually turn around for the Twins $49 million man.

Velocity wise, Nolasco has still thrown his fastballs over 90 miles per hour each year of his career. Although his slider has lost some heat, the usage out of the pen could be helpful in providing a boost. Being utilized in short stretches and brief inning by inning periods, Nolasco could likely reinvent himself in the year ahead. Although the relief role may not be one he continues to operate in, or even finish his career with, it could be the key to bringing back part of his former self.

By all measures, the Twins over-extended themselves on an average National League arm in the first place. They have been rewarded by a guy that has fallen behind in counts and been burned by it. To get him back on track, his slider needs to snap once again, and hitters need to believe they will be challenged early. At this point, the Twins are already swimmimg upstream, but generating something from the 2014 product is a must.

Betting on Ricky Nolasco at this point is far from the best idea, but it's clear there's a path to success that can be executed upon.
Posted by tlschwerz at 7:51 AM