Sano Problem, He's Already One Of The Best 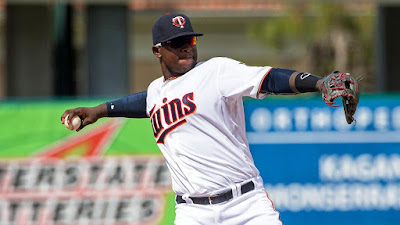 This offseason, the Minnesota Twins and Terry Ryan announced that they'd be moving their hulking slugger to right field. Despite having DH'd for the majority of 2015 and having played in the infield thus far, Miguel Sano was moving on to greener pastures. The changes has been met with skepticism, but it actually makes a lot of sense.

Let's start off internally. Minnesota employed Torii Hunter in right last year. He gave Paul Molitor a .240/.293/.409 slash line on offense, while making six errors in the field en route to a -8 DRS (defensive runs saved) total, and a 0.3 UZR (ultimate zone rating). In total, he was worth just 0.5 fWAR and was almost solely valuable for the locker room presence he was toted to bring with him.

Considering that narrative, it's pretty plausible to suggest that Sano is immediately going to be better for Minnesota than hunter was. Offensively, in just 80 games, the Dominican slugger posted a .269/.385/.530 slash line along with 18 homers and 52 runs batted in. By all indications, Sano is going to be an offensive juggernaut for years to come. Considering that offensive prowess, and the low bar Hunter left in right, Sano should have no problem settling in.

From there though, it's also a legitimate argument to look at Sano among baseball's best in right field.

Purely from an offensive standpoint, Sano takes a back seat to no one. After posting a 2.0 fWAR across just half a season, Steamer projects Sano to improve that mark to a 3.4 fWAR in 2016, and that may be conservative. Defensively, Sano shouldn't hurt his value too significantly (if at all), and a full season of offense could definitely vault him into the realm of a 4.0 fWAR player.

Looking at what right field offers across the landscape of big leaguers, Sano would come in 7th (just behind Jose Bautista) should he reach that 4.0 fWAR mark. The players ahead of him would be few, and include just Bryce Harper, Jason Heyward, Curtis Granderson, J.D. Martinez, Nelson Cruz, and the aforementioned Bautista. Looking at that group, it's also fair to suggest that with any bit of acclimation to his new role, Sano could overtake everyone from Granderson on down.

Pushing Sano to right field, while maybe not the most well received, seems to be shaping up like the correct move. A gifted athlete, Sano should have very little trouble once he settles in. Being a third basemen, it's more than fair to suggest that standing in right field would be a much less taxing defensive role. Utilizing his quickness from the hot corner, and his arm strength, Sano possesses some unteachable abilities. Surprisingly fleet of foot for his size, Sano can also be taught many of the nuances the position will demand should he commit to putting in the time.

On the surface, it's totally understandable to be somewhat taken aback or skeptical of the Twins decision to follow through with the Sano to the outfield campaign. When taking a deeper look at how it may play out though, there's little reason to suggest it doesn't put Molitor's best lineup on the field. Even if things work out moderately well, Minnesota will have to be pleased.

At the end of the day, if Miguel Sano can't play right field, he's not going to be able to play third base. The assumption though should be that he can, and will play right field. With a little bit of work and some luck, he could vault himself into the best at the position in The Show, and that's no small feat.
Posted by tlschwerz at 7:19 AM