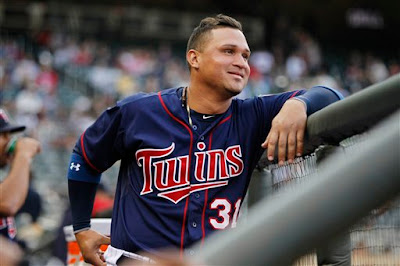 As a new Major League Baseball season approaches, a renewed sense of hope imparts itself upon Twins Territorians. After a near playoff run a season ago, Paul Molitor's club will be looking to take the next step forward in the year ahead. Typically, that step isn't taken by every player, as regression candidates rear their heads. By now, you're probably aware that for 2016, my pick is none other than Eddie Rosario. Should that narrative play out, we find ourselves staring at one of the Twins most forgotten men.

No doubt, Rosario heads into Spring Training with a grasp on the starting left field job. Someday (and possibly even this year), it may be turned over to German phenom Max Kepler. First though, a hulking Venezuelan will get his [final] crack.

Before there was Eddie Rosario in left field, prior to the defensive wizardry the position provided a year ago, and before the speed that the Twins employed, the role was Arcia's. Just a year removed from a 20 home run season, Arcia seemingly is everything Rosario is not in left. He doesn't play great defense, covering ground isn't his thing, but he's also no stranger to the long ball.

After a successful debut season in 2013, Arcia followed up his performance with a solid Sophomore season as well. On top of the new career high in homers (20), Arcia turned in a triple slash line of .231/.300/.452. His OPS was 18 points higher than in his debut year, and while he still struck out far too often, he kept his similar pace when taking walks. By this point, it had become apparent Arcia's contribution would be in the long ball or bust, and that's something the Twins would need to decide if they could live with.

Now out of options, Arcia must make 2015 look like a mirage. He posted career worsts in swinging strike percentage (19.6%), chased pitches out of the zone over 40% of the time, and generated "hard" contact over 10% less often (just 22.7% of the time) than he had in the first two years of his career. To say that a season ago, Arcia took a step back, would be putting it lightly.

Despite reports that Arcia has taken a new focus on the entirety of his game, including his defense, there's little doubt that his production will often be offensively fueled. Now with his back against the wall, he must make things stick in the year ahead. Working in his favor however, is that there should be opportunities.

Both Rosario and Arcia bat left-handed, so a platoon situation doesn't make sense for the Twins. However, if he has to start with a bench bat role, Arcia's numbers against righties has to be where he makes his case. Owning an .807 OPS against right-handers (nearly .200 points better than against lefties), Arcia has slugged 30 of his 36 career homers against righties.

At some point in 2016, things will come to a head for the Twins left field situation. Rosario could stumble, Arcia will need to hit (for power), and Max Kepler will be looking to weasel his way into the mix. There's a lot of moving pieces, but the guy without options, has been somewhat of a forgotten part of the puzzle. If Oswaldo Arcia's story with the Twins is to have a happy ending, it will have to happen, and now.
Posted by tlschwerz at 9:22 AM