Longball Ready To Shine Once Again 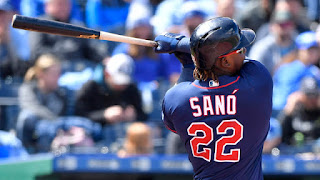 For years I tuned into the Home Run Derby during All Star Week of the Major League Baseball season. In the days prior, I planned to make it a must see TV event, and always made sure the schedule was blocked out. When the festivities came to Target Field, I was there in person to take in the slugging spectacle. Each year though, I walked away feeling a bit empty. Then 2015 happened.

After years of wondering how to spice up the event, I became convinced Major League Baseball hit gold. In putting a timer on each participant, the goal was to hit bombs quickly. You could still launch them, as it would give you bonus points, but liners served a purpose as well. An event that had become stale due to batters watching for the perfect pitch, was once again rejuvenated with some extra flair.

In 2016, the field featured somewhat of a darkhorse in hometown team product Wil Myers. Then there were boppers like Giancarlo Stanton and Mark Trumbo. Past participant Todd Frazier was back, and he looked to knock off Stanton in the final round. When the dust settled though, it was the Marlins slugger who powered his way, with some moonshots sprinkled in, to a total of 61 dingers through the three rounds. No one watching could have walked away from the event with anything but excitement for what had just taken place.

Fast forwarding to this season, it's hard not to get excited about what we may see on Monday July 10. Stanton has already announced he'll defend his crown, and it's been reported that the Twins Miguel Sano will also take place. Throw in the possibility of Aaron Judge and Cody Bellinger, and you have an amazing combination of strength, as well as youth, to put on display.

The derby itself caters to those with endurance. It's no doubt a workout having to swing the bat that hard, that often, in that short of a time span. Returning hitters like Stanton find an upper hand in knowing what to expect, but you'd be hard pressed to find people willing to be against other names in that type of a star studded field. It's what they've all done to this point in the season however, that may make everything that much more exciting.

For the majority of 2017, Miguel Sano has paced Major League Baseball in average exit velocity. Recently relinquishing that lead, he now trails only Aaron Judge. The Yankees rookie right fielder leads baseball in longballs with 27, and the Dodgers young star Bellinger check in right behind him with 24. Although Stanton (20) and Sano (18) don't have quite the numbers of the top two, there's no denying their ability to put some distance between a ball and home plate.

Digging a bit deeper into the statistics, there's even more numbers to suggest that this foursome could put on a show. Per Fangraphs, Sano ranks first in MLB among hard hit % (50%). Bellinger is second at 49% and Judge is tied for 5th at 48.3%. Then there's the HR/FB ratio, where each of the four players ranks in the top 15. Judge paces baseball (41.5%), Bellinger checks in 3rd (32.4%), Sano finds himself 11th (26.9%), and Stanton is 13th (25.6%). That all of these guys are hitting the ball out of the yard on one of four fly balls during a game, only raises expectations of what they can do in a derby scenario.

While we have to wait and see in regards to a full participant list, there's no doubt baseball fans should be clamoring for each of these guys to show up. The Future's Game and All Star Game itself will be fun this season, but it's this Derby that could end up topping them all. The groundwork was laid back in 2015 with the event itself returning to relevancy, now the sport has a cast list it can select that would be nothing short of A-listers.
Posted by tlschwerz at 10:26 AM