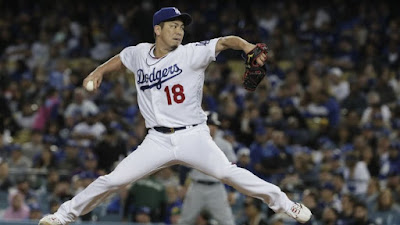 Derek Falvey and Thad Levine just put an absolute bow on the 2020 Minnesota Twins offseason. After acquiring Josh Donaldson in January, the refrain was whether or not he could pitch. Now nabbing Kenta Maeda from the Los Angeles Dodgers, the answer is yes he can.

Across Twins Territory there should be some absolute shock with this one. Not only was the impact-pitching arm acquired, but it absolutely cost an impact prospect. Brusdar Graterol showed up on the Major League scene last summer and brandished his triple-digit fastball. Showing off the bazooka arm, it was hard not to dream on him as a starting prospect.

It was apparent that there have been concerns about what Graterol profiles at in the bigs however. He’s never pitched more than 102 innings in a season, and he never worked exclusively as a starter in 2019. The talk going into the year was that Minnesota would unleash him in the pen, and the feeling was he had not yet developed the necessary secondary stuff to make it multiple times through the order.

Any time you see a big name prospect like this moved, it’s going to be hard to sift through the feelings. The message from Minnesota here is clear however. The window is open and the front office has kicked down the door. They see Graterol as a reliever long term, and conversely viewed him as the third best option in the up and coming trio including Jordan Balazovic and Jhoan Duran.

In Maeda the Twins get their coveted impact arm. He’s soon-to-be 32-years-old and is not a free agent until 2024. He will be paid just $3.125 million per year the rest of his deal, and he’s a strikeout threat pumping double-digits per nine innings. I'm not sure Minnesota viewed the tradeoff like this when the offseason started, but they passed on signing a 30-year-old Madison Bumgarner (with nearly identical numbers) to a five-year deal paying $17 million per season. In comparison, their decision looks pretty good.

The #MNTwins just acquired Kenta Maeda and three years of team control for pennies by giving up a guy they view as an elite reliever at best.

It cost the #Cubs Gleyber Torres and all of his control, for 3 months of Aroldis Chapman in a tradeoff to win the World Series.
— Ted (@tlschwerz) February 5, 2020

Although Maeda’s ERA’s haven’t always been glowing, he’s posted a FIP north of 4.00 just once in his four year MLB career. Walks have crept up in recent years, but he generally does a good job avoiding danger. Slotting in behind both Jose Berrios and Jake Odorizzi, there’s zero reason why he can’t elevate and assume an even large role in the rotation.

This move pushes Minnesota’s payroll up above $140 million landing somewhere around $145 million. That’s a nice expansion on the previous record of $128.4 million in 2018, and gives them plenty of flexibility now and in the future.

Buckle up Twins fans; we’ve got a contender here.

Posted by tlschwerz at 7:06 PM