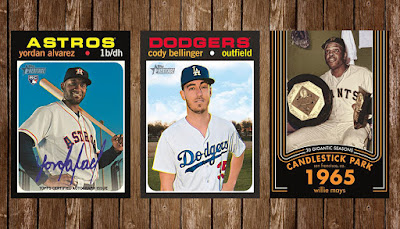 The annual release of Topps Heritage is upon us. While fancy cards and chrome recreations are all the rage nowadays, there’s no great offering for set collectors than the yearly unveiling of Heritage. A throwback to the 1971 design this year, Topps has collectors looking to add the best new rookies in a nod to yesteryear.

Specifically, for the Twins, Topps Heritage is somewhat of a mixed bag to start 2020. There wasn’t much in the way of big-league debuts last season, and Luis Arraez is no longer a rookie chase card. After seeing his first rookie card in 2020 Topps Series 1, Lewis Thorpe gets number two in this set. Heritage is home to the first rookie of former pitcher Brusdar Graterol, and although he’s now with the Los Angeles Dodgers, it should still be a neat opportunity to collect the fireballer.

There’s a handful of usual suspects among the base set checklist, and the Twins land four players (Gonzalez, Rosario, Sano, and Kepler) within the 100-card high number short print group. Last season we saw Byron Buxton appear as an action variation card, and until those trickle onto the market within the coming days, we won’t know what to fully expect.

Although the point of Heritage is set collecting and nostalgia, there’s always the inclusion of chrome versions for a select number of cards. That checklist is again 100 deep and includes five different parallels. Eddie Rosario, Max Kepler, and Jorge Polanco make up the Twins chase cards there. Chrome exclusives can be found in Spring Mega boxes as well, and that expands Twins players to Luis Arraez, Mitch Garver, Willians Astudillo, Jose Berrios, and Miguel Sano.

Hits rarely drive a Heritage product aside from key rookies, and there’s nothing of note for Minnesota fans here. There are two throwback autos in Sal Campisi and Tom Tischinski. Worn out subjects Bert Blyleven and Rod Carew also provide some in, while a 1/1 Harmon Killebrew cut can be had. There’s a couple of relics, both jersey swatches and mint coin types to chase as well.

As a whole, Heritage is a must rip product for new and old Topps fans alike. I’d have preferred to see a better autograph subject for Minnesota in the set, but maybe there’s an intriguing inclusion or two in High Number later this year. You can find Heritage at hobby stores for roughly $100/box or in multiple retail formats beginning on February 26.


Checklist here
Posted by tlschwerz at 10:27 AM