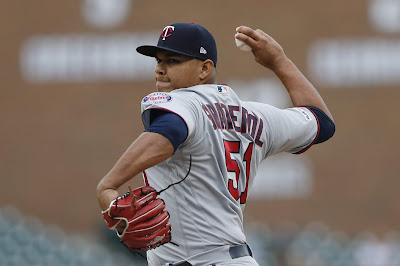 In the end, Derek Falvey and Thad Levine stood strong. After originally agreeing to a one-for-one swap of Brusdar Graterol for Kenta Maeda, things needed to be tweaks after the Red Sox decided against the Minnesota prospects medicals. Two days before pitchers and catchers report to Spring Training, we got resolution.

The Twins wound up not dealing with Boston at all, instead sending Graterol to the Dodgers (who had no problem with his medicals). They got Maeda, $10 million, and a yet-to-be announce prospect. Sweetening the deal just a bit, Luke Raley (who was acquired with Devin Smeltzer in the Brian Dozier trade) goes back to Los Angeles, and Minnesota sent the Dodgers their Comp B pick (67th overall).

Obviously the one-for-one version of this deal was the most ideal for the Twins. It’s likely why they agreed in the first place, and assumedly why Boston decided they needed to reassess things. However, Minnesota moved a very good arm they believe is ticketed for relief work, in order to get a top-50 starter that could slot in right behind Jose Berrios in the starting rotation.

Losing Raley isn’t the top 10 prospect situation that Boston was demanding, and while he’s a nice player, this isn’t an outfield he was going to crack given what’s established and who’s ahead of him. Getting the cash is hardly inconsequential as well. Maeda is guaranteed just $12.5 million over the course of his deal, and being on the hook for just $2.5 million of that is a nice situation to be in. Incentives drive the price up plenty, but being performance base, they’re benchmarks the Twins would happily see come to fruition.

I dissected this swap when the news originally broke, and nothing changes for the Twins from a roster construction point now. They still have a very good bullpen, this rotation is substantially better, and there’s still significant prospect capital to make more moves when deemed necessary.

Through all of this the only real loser is the former Twins fireballer. Graterol watched his name be drug through the mud in a very public way despite showing no indications of immediate injury concern. Instead of believing he could go down the street, he’ll now hop a plane from Fort Myers to Glendale beginning his 2020 season with a new organization.

Chaim Bloom landed some very solid prospects despite packaging a superstar into a salary dump. The Dodgers net a pitcher in Price that is more than desirable if healthy, and arguably the second best player on the planet in Mookie Betts. Minnesota never needed to be involved in any of this, and at the end of the day they really weren’t. An opportunity arose to get their impact starter two days before camp opens, and the front office jumped at it.

Now I think we can put a bow on this offseason and commend both Falvey and Levine for orchestrating what boils down to a solid “A” effort.

Posted by tlschwerz at 7:21 PM