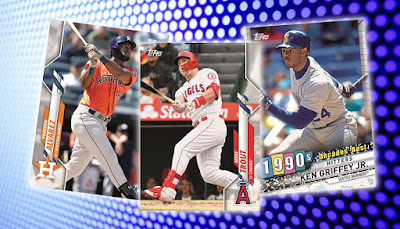 While we’re still a few days away from pitchers and catchers reporting to their respective Spring Training homes, baseball season gets underway with the release of 2020 Topps Series 1 on Wednesday. The first offering of the hobby for the 2020 season means baseball is around the corner.

Kicking things off in a big way this year, Topps is hosting the Million Card Rip Party today at Jerry World. As group breaks have become more prominent within the hobby, the card company sought out a handful of popular breakers and gathered them all at AT&T Stadium. They’ll showcase the event live, and collectors will get some of their first looks at the new cards.

2020 Series 1 has a chance to go down as the best initial flagship offering ever. While it’s normally Series 2 or Update that highlights the sport’s best rookies, this season is somewhat unique. American League Rookie of the Year winner Yordan Alvarez will get his first rookie card, and the class also includes young stars like Gavin Lux and Bo Bichette. Deep and with plenty of star power, this group could have staying power for quite some time.

Specifically, from the Twins, Lewis Thorpe is the lone rookie card in the set. However, Marwin Gonzalez gets a Minnesota card, as do Nelson Cruz and Taylor Rogers. Autographs are aplenty from the Twins, and they include everyone from Luis Arraez to Bert Blyleven. Max Kepler, Jorge Polanco, and Jake Odorizzi have some pretty big chase cards to search for, and there will be some chrome offerings of former Topps line Turkey Red littered into retail.

Given Thorpe is the only rookie for Minnesota, and he’s not seen as a desired commodity in the hobby, it would really only be the hits that drive a decent return from Twins subjects. However, the manufactured relics including the Sleeve Patch and Rookie Retrospectives sets could wind up being some of the best-looking manufactured offerings we’ve seen in years.

Another takeaway from Topps’ early season checklists is that the Twins will have some new names making signing appearances in 2020. It appears Trevor May, Mitch Garver, and Jorge Polanco will all be autographers in Topps product this year. With so much Rod Carew and Bert Blyleven focused content in the hobby of late, new names generating hype for Twins fans is a must. Hopefully more Joe Mauer cards will filter back into production at some point, but the Bomba Squad putting Minnesota back on the map is a great start.

You can find hobby boxes of 2020 Topps Series 1 at your local card shop, and blaster boxes as well as other retail configurations will be available at Target, Walmart, and Walgreens.