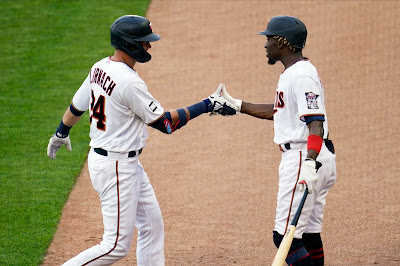 Alex Kirilloff was the Twins first round draft pick in 2016. When the new front office took over, they went with Royce Lewis the next year, and then followed up with Trevor Larnach. Since that point I’ve contended the separation between Kirilloff and Larnach shouldn’t have been presumed to be much. We’re now seeing that take shape.

Kirilloff is playing through an injury, and while he’s having himself a nice debut, I don’t think it’s quite to the level he’ll reach in short order. That’s given way for Larnach to shine though, and he’s done exactly that. Trevor was thrust into a Major League role given the Twins outfield health issues. Having played just three games at Triple-A, and only 43 at Double-A two years ago, a premature call-up is probably fair to suggest.

Larnach hasn’t yet ran into much power. He has just nine extra base hits, of which only three have left the yard. That isn’t to suggest the process isn’t sound, though. Drafted with notes of high exit velocities, that has played out at the highest level. Larnach owns a 37.1% hard hit rate and a 14.5% barrel rate. His xSLG sits 40 points higher at .466 and he owns a max exit velo of 116 mph.

I don’t think you’ll find anyone jumping to suggest that Larnach is otherworldly on either of the corners, but it’s more than apparent he can stick. With the bat profile he has, a traditional corner outfielder with pop is exactly what he’s trending towards. This isn’t a finished product by any means, but I think the Twins have to be thrilled with the early returns. Recently at Fangraphs, Paul Sporer also took a look into where Larnach could go from here.

Both Larnach and Kirilloff should be mainstays in the Minnesota lineup for years to come. We have seen both of them bat in the heart of the order this year, and while that’s more reflective of circumstance, they’ve held their own plenty. In lieu of so many injuries having piled up on the Twins this season, it’s been nice to see opportunity parlayed into production for a guy like Larnach.

Not every prospect comes up and flourishes. The Seattle Mariners just had to demote top prospect Jarred Kelenic after a terrible start. Baseball is hard, and even moreso when the runway for readiness hasn’t been there in a traditional sense. Give it to Larnach for battling that adversity and still producing at the level he is.

While Kirilloff is still my pick to be the better player with a more likely shot to win a batting title, I wouldn’t be shocked to see Larnach round out into a more complete specimen with an opportunity to bang 40 homers in a single season. It’s been a good start, and this is just the beginning.

Posted by tlschwerz at 7:24 AM