From Puerto Rico To The Pros: The Jose Berrios Story 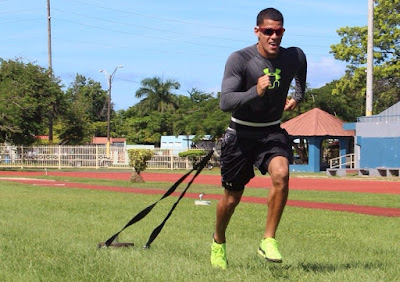 4,555 plate appearances, 4,072 at bats, 1,106 hits, 141 home runs, eight positions, and 11 seasons, that's what Michael Cuddyer gave to the Minnesota Twins. Most importantly though may be the number not yet listed. Following the 2011 season, Cuddyer left for Colorado, and he was deemed an A-rated free agent. When the Twins didn't bring him back, they were handed the 32nd overall pick in the 2012 Major League Baseball draft, and that's where this story begins.

Coming off of a 63-99 season in 2011, and a 5th place finish in the AL Central, the Twins were handed the 2nd overall pick. Following the Houston Astros selection of Carlos Correa, the Twins took a high schooler out of Georgia named Byron Buxton. The upside was immense, Minnesota settled in for the next 39 rounds.

In the first competitive balance round though, they were awarded the first pick (32nd overall). Going the high school route again, the Twins nabbed Jose Berrios, an 18 year old from Papa Juan XXIII High School in Puerto Rico. With players like Joey Gallo and college star Stephen Piscotty still on the board, Minnesota believed Berrios was their guy. He signed for the slot amount ($1.55 million) and was on his was to the Gulf Coast League. 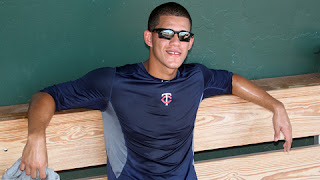 As an 18 year old, Berrios was playing with multiple players far superior to himself in age. Signing quickly, he was able to appear on the mound in the Twins system in short order. Coming out of high school, being assigned to rookie league made a lot of sense. Berrios pitched in eight games in the Gulf Coast League, making one start. He owned a 1.08 ERA and struck out batters at a 14.6 K/9.

Pitching in the Appalachian league, Berrios made three starts. He twirled 14.0 innings, for E-Town surrendering just two earned runs to the tune of a 1.29 ERA. His dominance continued as he racked up a 14.1 K/9. Despite the small sample size, it was clear the Twins prospect was pushing for a new challenge.

If there ends up being a point in Jose Berrios' career that he can look back and wonder where he could have improved, all indications suggest it may be in the Midwest League. After an impressive 2012, Minnesota started their young prospect with the Cedar Rapids Kernels. For what would wind up the first and only time of his career, Berrios would remain there for the whole season.

With teammates such as Byron Buxton, Max Kepler, Travis Harrison, and Jorge Polanco, the Kernels had plenty of talent. Berrios made 19 starts for the Kernels in 2013. He would throw just over 103 IP (103.2 to be exact), to the tune of a 3.99 ERA while striking out 8.7 per 9 and walking 3.5 per 9. The results weren't discouraging, but no doubt were a far cry from the dominance he had shown a year earlier.

Still just going to be 20 years old the next season, Minnesota stayed the course and Berrios had his eyes set on Fort Myers for 2014. 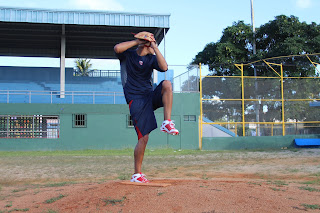 Still somewhat flying under the radar, the Twins were set to start Berrios at High-A Fort Myers as a 20-year-old in 2014. he was gaining some steam in the national category however as he was rated the 90th best prospect by MLB.com and the 75th best by Baseball Prospectus. After his step back a year before in Iowa, this was his time to prove something, and that he did.

Back down in Florida for the first time since the Gulf Coast League, Berrios was given the challenge of tackling the Florida State League. Now significantly younger than the competition, Berrios failed to show any fear. He started 16 games for the Miracle putting up a 1.97 ERA, winning nine of his starts, and sitting down batters at a 10.2 K/9 clip. It took just 96.0 innings before Minnesota moved Berrios up a level to Double-A New Britain.

Now with his second team of the season, Berrios had made a significant jump in the Twins system. For the Rock Cats, the Puerto Rican started eight games. Across 40.2 IP, he owned a 3.54 ERA 6.2 K/9 and a 2.7 BB/9. No doubt the numbers slipped, but being all things considered, he was still pitching well above his expectation. Then it happened.

Needing a spot starter with playoff implications on the line, the Rochester Red Wings called upon Berrios. He had now pitched across three different minor league levels in just one season. His Triple-A debut wasn't pretty (6 ER in 3.0 IP), but it only fueled his fire. Having accomplished a trip through the entire farm by the time he was 20, Berrios wanted to push the ceiling further. 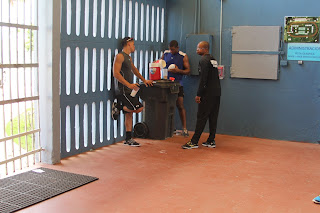 Heat Of The Winter

Motivated and determined, the offseason before 2015 was a proving ground of sorts for Berrios. He had coined his own phrase, #PUSHTHEGAME, and he turned attention to God in praising him wherever he could. Workouts were publicized and accountability partners were made out of the over 5,000 followers on Twitter.

Training down in Puerto Rico, Jose Berrios was able to use the heat over the winter to his advantage. Running, lifting, and mechanics were the focus of his regimen. His body showed massive improvements, while his tenacity and drive remained as heightened as ever. It was clear that 2015 was the year Berrios wanted to put the big leagues on notice. 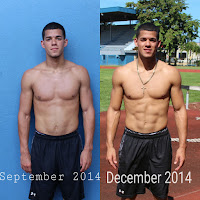 Coming into spring training with the desire to crack the major league rotation (despite being a non-roster invite), and setting goals high, Berrios' national attention only grew. Baseball America had named him their 36th prospect, MLB.com called him #32, and Baseball Prospectus tabbed him #48. The Twins gave Berrios six innings of Grapefruit League action, and he turned in four strikeouts and no walks, while giving up just seven hits. Shipped out to Double-A Chattanooga, Berrios made it clear he would be back.

Passed over as the Opening Day starter (that honor would go to Tyler Duffey) for Chattanooga, Berrios allowed the motivation to mount. Playing for the Twins newest affiliate, he quickly became must watch baseball. Unfortunately for Lookouts fans, it also seemed his time in Tennessee would not last long.

Starting just 15 games for the Lookouts, Berrios dominated to the tune of a 3.08 ERA and a 9.1 K/9 across 90.2 IP. Nine of his starts were of the quality variety, and Berrios also recorded a two-hit, eight strikeout, complete game against the Birmingham Barons in mid-May. Once again, moving time had approached for the Twins newest phenom.

Being called on to pitch for Triple-A Rochester for the first time since his ugly spot start a season ago, Berrios had some demons to face. Motivated and focused though, he the challenge would no doubt be assumed head on. 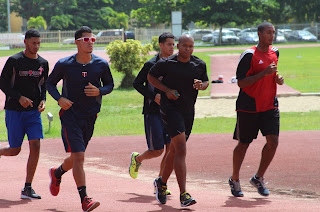 That 18-year-old kid from Puerto Rico hasn't changed much, but then again all he has done is change. Berrios is the same uber-motivated individual that views success as the only result. His drive and passion are unparalleled, and his faith helps to carry him in all aspects of his life. While those things have all remained constant, he hasn't ever stayed in one place too long, and that appears to once again be the case.

As the Red Wings ace continues to lay waste to the International League, and September looms, all sights are set on the next level. Berrios' goal has constantly been the big leagues, and it appears he'll get that chance in 2015. You can bet he'll be surrounded by the same family and friends that have elevated him to this point, and stature aside, the Puerto Rican star will have an imposing presence.

Thus far the journey has been one electrifying stop after another, and at this point, there's no reason to believe the final hurdle won't be accompanied by more of the same. Not immediately coined the can't miss type, Berrios has paved the path and done so at lightning speed. Repertoire and drive in tow, it's now just a matter of when.

While his eventual debut with the Minnesota Twins is no doubt the next goal, there's more to Berrios than can be quantified on the diamond. As the odds and detractors have been lined up against them, he has risen above; as much for other reasons as for those specific to baseball. In who Berrios is, he succeeds as well.

Sure, at this point, Berrios is the pitching prospect highlighting the Minnesota Twins farm system. Don't tell him that though, as he continues to make time for others. Cedar Rapids Kernels player, and fellow Puerto Rican, Edgar Corcino, is just one of the friends Jose has worked with. Pushing their game together this offseason, both are seeing dividends (Corcino is slashing .296/.350/.416 with Cedar Rapids).

Although Corcino is already a pro, Berrios' workout partners span a much wider range. Friend Jorge Soto's son, Akxel Soto, has been working with both Jose and his trainer for the past 5 years. Now 13, the 2020 Major League Baseball draft is absolutely where the young Soto has his eyes set upon. Berrios has never balked at the opportunity to help himself or anyone that asks get better, and he's able to accomplish it all because of the position he's put himself in. 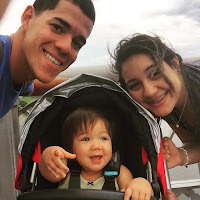 Wife (Jannieliz Marquez) and baby daughter (Valentina) at his side, Berrios has had plenty along for the ride the past two seasons. Aided throughout the season by a great group of supporters, trainer Josue Lioner especially, Jose has been granted the opportunity to be both family man and lights out pitcher. The support system has offered the ability to focus on the task at hand, and his wife and daughter have provided a well deserved retreat from the game.

Humble, mild-mannered, and reserved, Jose has done an exceptional job of fulfilling the ever-rising expectations. Letting his game speak, motivating himself, and confiding in those that have been there every step of the way, the success has simply followed suit. It is in these decisions and character traits that Berrios should continue to excel, no matter where the game of baseball takes him.

Much has been accomplished, but the ride has just begun. You can bet when he makes his appearance on the mound for the first time in the big leagues, he will do so on his terms. Toting "La Maquina" and letting The Machine drive the person that he has become.
Posted by tlschwerz at 7:05 AM