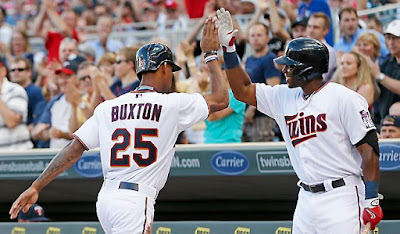 As August rushes towards completion, and the Minnesota Twins look to roster expansion in September, there's plenty of reasons to be glued into the Major League Baseball season. Despite looking like the playoffs are a longshot, the Twins have plenty of storylines left to monitor. With 2016 looking like the opening of an upcoming window of success, it's the end of this season that should pave the way.

I'd hope to see Minnesota utilize roster expansion to get the feet of a few young players wet. There's no doubt contributions will be expected to come from fresh faces next year, and both Terry Ryan and Paul Molitor could remove the jitters ahead of time. Looking at how this season has played out, and what should be coming, it's time to take a way too early look at what the 2016 Opening Day roster could look like.

To set some ground rules, I'm going to be operating with the understanding that no free agents (from outside the organization) will be included. With that in mind, here we go.

Kurt Suzuki will be back for the Twins in 2016, and there's a good chance he'll be the backup. He's been horrible behind the dish in 2015 and has slashed just .229/.288/.304 in 95 games. His receiving skills aren't good, and he's become a veteran relief option at best. I expect Chris Herrmann to be the most likely relief option. Josmil Pinto has not been behind the plate for months, and won't get the chance again until spring 2016. He's going to need to earn his way from Triple-A to start the year once again.

I'd expect the Twins to address the backstop role in free agency. Matt Wieters could be a good fit depending on his price. With arm issues, he won't play everyday either, and Suzuki could provide a decent platoon partner. No matter what happens, catcher is a giant wildcard for Minnesota going forward.

Mauer is going to start at first base, whether that's warranted or not. Dozier has placed himself at the center of the discussion for the title of best second basemen in the big leagues. Trevor Plouffe should be someone the Twins look to offer an extension, but at the very least, he's going to get paid in arbitration. Sano will continue to mash and play sparingly in the field, and Eduardo Escobar can spell players all over the infield.

For purposes of the exercise, Jorge Polanco will be the Twins opening day shortstop. Part of me likes that idea as he's hit .292/.341/.392 across 99 minor league games this season. His bat looks major league ready. The part that's concerning is his 27 errors across 91 games at short. His glove is ok, but his arm is concerning. He's best suited to play second base, and that isn't happening in Minnesota.

I'd be more than ok with the Twins kicking the tires on a guy like Ian Desmond. His ugly 2015 season should drive down his negotiating power, and he has posted back to back to back 4.0 fWAR seasons prior to this year. Ideally, he'd provide the Twins with a good option until former first round pick Nick Gordon is ready.

From left to right, the Twins might have the best defensive outfield in the big leagues. Between Rosario, Buxton, and Hicks, opposing teams will have an incredibly tough time finding any open grass. Rosario and Hicks have helped to pace the Twins offensively this season, and while Buxton struggled in his debut, things have turned since (he's batted .404/.440/.532 in 11 Triple-A games).

Without being too harsh, I'd like to see Torii Hunter retire. He's still get some pop in his bat, but he's hit sub .130 since July 1st, and he looks every bit the part of a 40 year old. Leadership is a great quality, and I'm indifferent to whatever check the Twins want to cut him, but I want his spot going to someone else. If he wants to come back however, the Twins will allow it, and he could be the reason Max Kepler starts the season at Triple-A (even though that's not a bad thing anyways).

Less of his doing than a product of a situation, Arcia likely gets one last shot with the Twins in 2016. He's out of options and needs to prove his worth. The power definitely can play, but showing no semblance of a plan at the plate has not gotten him in a good place this season (he's batting .107/.200/.167 since July 17).

Out of all the roles on the Twins roster, outfield is the one that Minnesota least needs to look for outside help.

This is an incredibly hard area to decipher for the Twins with so many moving parts, but I feel good about this suggestion. Hughes and Santana are locks, with Gibson being likely included in that grouping as well. I went with Milone for the 4th spot because I think the Twins should keep him through arbitration, and I'm not sold on Ricky Nolasco being healthy.

Should Nolasco return just fine from his ankle injury, he's going to be in the rotation. He has proven to be hurt more often than not, and is also a trade candidate if Minnesota wants to talk to the Padres over the winter. What happens with Nolasco could and will likely determine how the Twins approach Milone in arbitration.

Berrios should debut in September, and while it will only be for a couple of starts, he should have a very real chance at breaking camp in the rotation. He owns a 3.18 ERA across 141.1 IP on the farm this year and owns what would be a rotation best, 9.1 K/9. The Twins number one pitching prospect would be a quality addition to the back end of the grouping.

If the Twins do decide to target pitching in free agency or through a trade, the goal must be quality over quantity. With a stacked farm system, dealing some real assets for a top of the rotation pitcher wouldn't be a bad idea. As things stand, the Twins starting five are a grouping of 3-4 type guys that will experience ebbs and flows throughout the season.

Like the rotation, projecting bullpen turnover is incredibly tough. One thing is for sure though, for a group that's been so bad, they will undoubtedly have new names in the fold next season. Looking at who should be considered locks, I'd only go as far as saying to look for Jepsen, Perkins, and May.

Jepsen came over at the deadline from the Rays, and the Twins didn't seek a guy with team control not to exercise it. Arbitration eligible for one more year, Jepsen will likely be retained by Minnesota. Perkins remains one of the best closers in the AL, even despite his rough stretch since the All Star Break. I think Trevor May has the makings of a starter, but he's also been a very capable reliever, and Minnesota is hurting a bit more there right now.

Instead of making the bullpen up of retreads like Brian Duensing, Minnesota has an opportunity to give some young, fresh, arms some leash next season. Alex Meyer's 2015 has been a disaster, but starting in the pen next season could refresh his value. Duffey moves out of the rotation and should see more of a velocity spike, and I've thought Rogers looked like a bullpen lefty for a while now. I'll go out on a limb and suggest that the Twins give 2014 2nd round pick Burdi an early crack. His 11.5 K/9 would be a huge boost to a poor 2015 unit.

Again, much like the rotation, if the Twins are going to target relief help this offseason quality has to be the focus. A lot of the names above are rather unproven, but the ceilings are also relatively high. For the Twins to block what they have created from within, it should only be with something considered a virtual "sure thing."

There you have it. We're in August, and right now, that's where I see the Twins starting off 2015 when it comes to their active roster. The farm system is starting to spill over now, and that should only continue for years to come.
Posted by tlschwerz at 10:56 AM