A Fix Behind The Dish 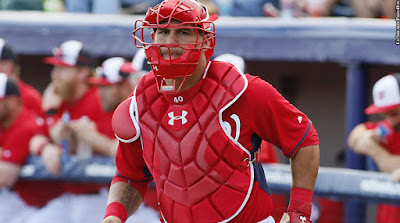 The Minnesota Twins have had a multitude of issues to start the 2016 Major League Baseball season, and it really shouldn't be lost on anyone that the catcher position is one of them. Between Kurt Suzuki and John Ryan Murphy, neither has done anything to clarify things for Minnesota moving forward. If the club is going to be competitive in 2017, allowing the role to be a black hole can't continue to happen.

Despite the unlikely emergence of Juan Centeno in his brief stint with the big league club, it's pretty unfair to tab him as a future answer. Suzuki is in the final year of his time with the Twins, and would need over 485 plate appearances for his 2017 option to vest (he's currently on pace for 356). Considering Terry Ryan gave the Hawaiian an extension after an out-of-nowhere All Star first half in 2014, a fall in production should've been all but expected.

Through the club's first 35 games, Suzuki has played in 23 contests. He owns a horrid .191/.250/.265 slash line and has logged just four extra base hits. His 23% caught stealing rate once again falls well below the 32% league average, and he's rarely been known as a pitcher's friend in the framing department. Playing a position generally acceptable to be heavily an offensive or defensive asset, Suzuki has mastered being neither at this point.

Behind him, John Ryan Murphy has done little for Minnesota as well. The return from the Yankees for former Twins outfielder Aaron Hicks, Murphy played in just 11 games for the Twins prior to being demoted to Triple-A. He owns a .075/.119/.100 slash line on the year and picked up just a lone extra base hit in 44 plate appearances.

It's far from doom and gloom for Murphy however. At just 25 years old, he's got plenty of promise still tied to him. He's a years removed from slashing .277/.327/.406 in 67 games with the Yankees. He's not a huge power threat, but his .734 OPS in 2015 shows he capable of being much more than a guaranteed out in a big league lineup. Expecting him to be back up with the Twins in 2016, and when given some consistent run, produce, seems like a pretty solid bet.

What's hard to suggest however, is asking the Twins to go into the 2017 slate in the same fashion they entered this year. It's probably fair to call Murphy a relative question mark next season regardless of how the year plays out. That would mean Minnesota would likely be carrying John Ryan as their starter, with top catching prospect Stuart Turner in a backup role. As of right now, neither Turner nor Mitch Garver (the Twins second best catching prospect) have played above Double-A. Both have flashed offensively at points, but leave plenty to be desired. Turner is MLB ready defensively, but the Twins probably aren't in position for another Drew Butera at this point.

That turns our focus to free agency, and begs us to wonder what may be a realistic solution. It probably stings a little, but a former Twins prospect could be in the cards.

Currently playing for $5.35 million with the Nationals, Ramos is set to his the market. He could be brought back to Washington, but if the Twins have an opportunity to give him a look, it's hard to argue against that they should.

Ramos will be 29 years old in August. He's caught just shy of 500 games throughout his seven year major league career to date, and he's had durability issues having played over 100 games just twice in his career. The expectation would be that Ramos would be looking for his payday, but if Minnesota can nab him on a two-year deal and slightly overpay, it's an avenue I'd consider.

I'd absolutely be weary of signing another long term deal for a guy behind the plate if I'm the Twins. Suzuki had plenty of warning signs that Twins management ignored when giving him his extension. Ramos is far from without his own issues, but if you can get him on a deal that makes sense, it's hardly unfair to expect him to allow John Ryan Murphy to blossom on his own time, while giving Turner or Garver a bit more proving time down on the farm.

Looking back at how the Twins have rounded out 25 man rosters, they haven't had an ideal catching option since they lost their superstar to a brain injury, and before that, when Ramos himself was the answer. I'd wager it's far from unfair to suggest he may be that ideal option once again.
Posted by tlschwerz at 7:36 AM