Is Molitor The Man For Twins? 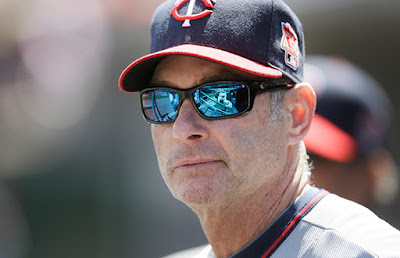 Today, my plan was to write about Eddie Rosario and why it's incredibly odd how the Twins continue to use him. I decided to scrap that piece as thinking about Paul Molitor ended up tying in with it anyways. The Twins manager had one of the best seasons in recent memory a year ago, but since, things have gone horribly wrong. I'm not necessarily sure Molitor is completely to blame, but he's definitely part of the problem.

Looking back to Rosario, Molitor's lineup construction has continued to be questionable at best. In the latest display of this, the Twins skipper started Rosario over Oswaldo Arcia in a game against right-handed pitching Collin McHugh of the Astros. On the season, Rosario is the lone Twins regular with an average below the Mendoza Line. Against righties, he's hitting a disgusting .182/.194/.348. Arcia, who has dominated righties over his career, is hitting .234/.296/.426 on the season (not great, but significantly better than Rosario).

Having started out the season getting next to no playing time, Arcia has forced the Twins hand with his solid play at the plate. It seems however, that the club remains enamored with the idea of what Rosario was a season ago, and they'll do everything in their power to get him in the lineup over the Venezuelan slugger.

It's not just in his outfield that Molitor seems somewhat confused however. The use of the 25 man roster has been concerning at best. While it's Terry Ryan in part that gives him the players, it's solely on Molitor's shoulder to get guys into the action. Max Kepler was with the Twins for right around 20 games to start the season, and was given a whopping 14 plate appearances and an inexcusable two starts. Alex Meyer was utilized in a similar fashion. Being called up initially for the bullpen, he was utilized once in a relief role and made just one start after sitting on the bench for a handful of games.

Molito's odd roster usage isn't something tied to just 2016. I questioned how the club utilized Michael Tonkin and Kennys Vargas a season ago. Jorge Polanco has been jerked around this year, and I'm guessing there will be a few more instances down the line. With a roster that is going to employ a certain level of youth, Molitor seems somewhat unsure of how to effectively utilize the players at his disposal.

Then there's the questionable situations that have presented themselves for the Twins. Whether it be late game substitutions, or pinch hit opportunities, sometimes it appears Molitor attempts to do too much while doing nothing at all.

In 2015, players like Brian Dozier and Miguel Sano were routinely pinch run for late in games for an assumed speed upgrade. Whether Eduardo Nunez represents a significant advantage or not is to be debated, but losing a bat like that should it come around again in the order is a situation that has far too often reared its head. Bunting has also become something Molitor has been in favor of in odd situations, or less than ideal batters (ahem Arcia), despite a team that has shown no advanced ability to get it down. The in game adjustments have added up to be a collective grouping of head scratching moves almost more often than not.

At the end of the day, I'm not sure I'm yet advocating for the Twins to look elsewhere. I loved the Molitor hire, and think he has a great baseball mind. That being said, nothing this season has given me any sort of belief that he's the guy that can take Minnesota to the next level, and back to playoff relevancy. There's little to no reason to believe the Twins would ever make a coaching move mid-season, especially with an organizational guy. That said, the situation playing out as it has, could end up stalling any sort of turnaround even further.
Posted by tlschwerz at 6:10 AM