Dozier Is The Sellout The Twins Needed 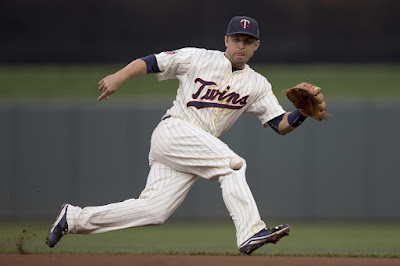 The 2016 Minnesota Twins are an absolute dumpster fire. Through 45 games, they own an 11-34 record, and there's really no reason to believe there will be a significant change any time soon. What seemed possible to be a second straight exciting season for the Twins has turned into nothing short of a nightmare. At the middle of it all is their newly appointed leader, Brian Dozier.

Recently, I touched on the defiance of Dozier's approach at the plate, and how it's there that his leadership has failed the Twins the most. Deciding that everything has to be yanked to left field has not only hurt himself, but has done in his 24 teammates as well. Upon further consideration however, there's significantly more to Dozier's story.

I think Brian Dozier was the sellout that he needed to be, and the one the Twins so desperately wanted.

Minnesota made Dozier an 8th round selection out of Southern Mississippi in the 2009 Major League Baseball draft. He was anything but a slam dunk, but had nice projectables being taken in the top 10 rounds. Without the fanfare that follows first round picks, Dozier's grind started from day one.

After a strong spring training in 2012, and with a Twins team desperate for a breath of fresh air, Dozier saw his opportunity. He started the first 28 games of the 2012 season with Rochester slashing .276/.339/.371. In turn, it led to his MLB promotion for the Twins. During his rookie season, Dozier slashed .234/.271/.322 and played all 83 of his games for Minnesota at shortstop. He made 15 errors, wasn't a fit for the role, and was sent packing.

Now, before we move forward, we have to take a minute to look back again. As a minor leaguer, from 2009 to 2012, Brian Dozier played in 365 games on the farm. Across that action, he hit a total of 16 home runs, and never picked up more than 9 (in 2011 between Fort Myers and New Britain). During his rookie season for the Twins, his total was six, in just 84 games. Something had changed.

As a big leaguer, Dozier worked with an approach that was seemingly the opposite of what he rose through the minors with. No longer a high average guy, and sacrificing some of his on base skills, he'd transitioned his game to play with power. Becoming a dead pull hitter, Dozier saw balls begin to fly over the fence. As his career has gone on, that approach has only become more drastic. Here are his pull percentages in the big leagues:


Starting in 2012, Dozier went from hitting 6 home runs to, 18, 23, and then 28 (he has four through the first 45 games of 2016). What took place was a hitter that went from being ok with something that worked, to an approach that he was determined to make work. In fact, it absolutely did.

In becoming a dead pull hitter, Dozier harvested power he'd never displayed at any point in his career previously. He now looked the part of a 20/20 hitter, and could lay claim to being one of the Twins greatest power threats. Despite the fall in average, he'd elevated himself to be among the best hitters at his new position, second base, in the big leagues. The culmination of his efforts came to a head in the summer of 2014.

Snubbed from the All Star game despite looking like a logical candidate, he was instead selected to participate in the Home Run Derby. Taking place at Target Field, and with 18 homers to his credit, it was far too good of an opportunity to pass up. Unsurprisingly, he didn't hang with the likes of Yoenis Cespedes and Todd Frazier, totaling just two homers in the contest. The event though, brought forth his gain, and the Twins fall.

On March 24, 2015 the Twins signed Brian Dozier to a four-year, $20 million contract extension. They bought out his arbitration years, and did so with a power hitting second basemen almost certainly going to cost them more in the long run. The problem though, was that only would be true if the production continued.

In believing, and making himself out to be a home run hitter, Dozier elevated his career beyond where it may have went, but also likely shortened it significantly. Now still a dead pull hitter seemingly lost on the possibility of using the other field, his ineptitude at the plate has the Twins on the hook for $15 million over the next two years. Pitcher's aren't allowing Dozier to be the hitter he created, and thus far he's failed to adjust.

A one time average and gap power guy, Dozier became enamored with the long ball. It allowed him to land a nice contract, he secured the right side of the Twins infield for the better part of the past four years, and it may have elevated his career to heights he never could have imagined. When things crash though, they do so hard.

At the end of the day, I can't find any reason to fault Dozier for taking the approach at the plate that he has over the past few years. In fact, it's even hard to fault him for failing to adjust as he has in 2016, and may very well continue in the future. If there's fault to be had here, it's on the Twins. While the cost certainty of the contract extension may have looked nice initially, understanding that such a drastic change in approach may not be sustainable was an oversight, and one that could be incredibly costly.

Minnesota could still very easily trade Dozier. He doesn't have no-trade protection, and his contract is relative peanuts in comparison to the going rate of a guy one year removed from an All Star appearance. That said, whether playing at Target Field or not, whoever employs Brian Dozier has to bank significantly on him continuing to get mistake pitches into his thirties, because the days of pitcher's allowing him to sell out and pull pitches into the left field seats appear to be over.

Had things gone differently, Brian Dozier may have had a similar career arc to that of a guy like James Beresford. A good minor league hitter that hits for average but doesn't do anything to an extraordinary level. Instead, Dozier capitalized on his moment; it gave him his rise, and now will likely contribute to his fall as well.
Posted by tlschwerz at 8:25 AM